The FN509 is a fantastic handgun by FN. This polymer framed pistol may be the replacement for the Glock 45 you've been looking for.

It’s extremely comparable to the Glock 19 or the Glock 45 with a longer frame. The FN 509 could easily use this gun for concealed carry or outside the waistband carry.

I could easily see the FN509 being a duty weapon for some law enforcement agencies or militaries. 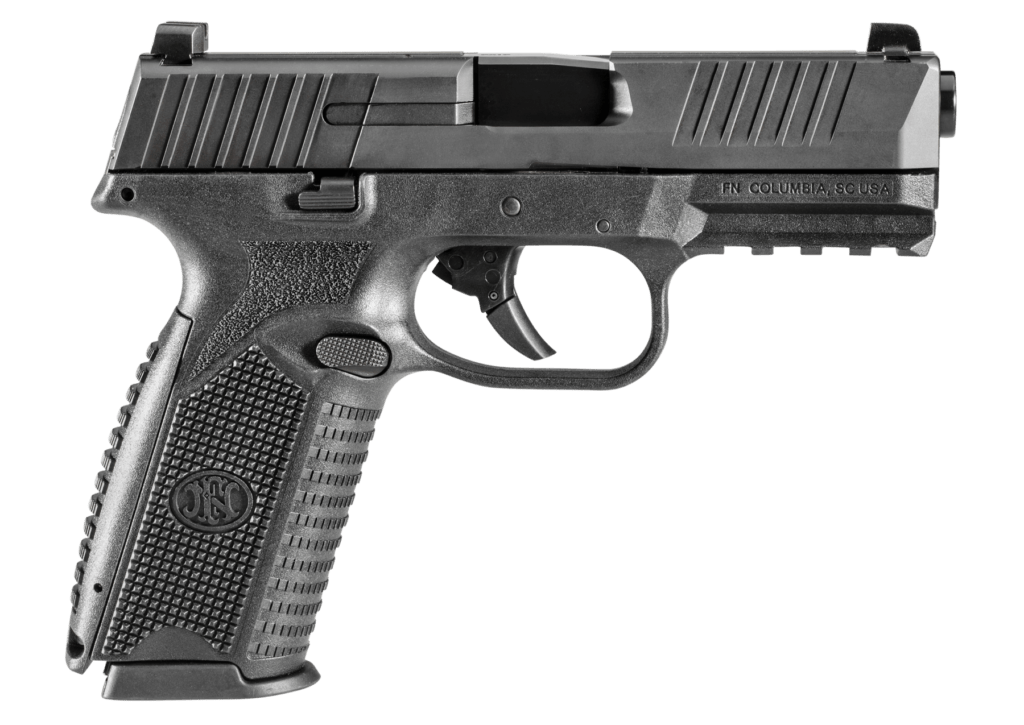 Fabrique National Herstal, from here on referred to as FN, is located in Herstal, Belgium, and is the largest exporter of small arms in Europe.

FN is part of Herstal Group, a holding company that also owns Winchester and Browning, which the regional government of Wallonia owns.

In 1987, a decade later, US Repeating Arms Co. and the Winchester brand were acquired by FN and are still owned under the Herstal Group to this day.

Here’s the factory breakdown of the FN 509:

The FN 509 features a 17-round metal-framed magazine. The follower on this magazine is orange, and it appears to have a very durable construction.

The availability of these magazines is good, and they are pretty easy to find, but the price is rather steep.

The magazines come in at $60, which is steep compared to other striker-fired pistols.

The magazine well on the FN 509 is not very flared. It is easy to get the magazine in, but there’s no real flair to the MagWell to funnel the magazine into the mag well for quick reloads.

Grip and Ergonomics of the FN 509

The FN 509’s grip has the FN logo in the grip frame. It has an extremely good grip texture.

The rear back strap comes off, and the sides feature the FN logo with an almost RTF2 type grip texture.

The grip in your hand feels really good. I can establish a master grip very easily, and the gun sits very well in your hand.

Keeping your index figure running down the side of the gun feels very natural, comfortable. There’s nothing in the way of your index finger.

My hands are a little bit smaller, and the magazine release seems to be a little hard to get to.

Again, the FN 509 has removable back straps and comes with two additional back straps that you can change out to adjust to feel better in your hand possibly. So, that could be one of my issues.

The sights on the FN 509 come with a pretty decent set of sights.

The 509 has night sights from the factory. They are the standard sight picture: two on the rear, one on the front.

The sights are relatively clear. They’re not quite as white and fluorescent as I would prefer, or even having just a front orange dot or green dot, then having no dots on the rear sight.

But overall, from what I can tell, they’re effortless to pick up, and they seem to do the job. I would put them on par roughly with the Glock Night Sights.

Nothing really to write home about on the sights, but they do seem to get the job done.

Let us talk about controls on the FN 509; there is no safety on this model.

Much like the Glock series of pistols, it is a safe-action style pistol, and the trigger actually has a secondary safety in it. This trigger really reminds me of the Smith & Wesson M&P series triggers.

This trigger has a break in the middle that you have to squeeze and depress to make the pistol fire.

The magazine release on this gun is probably my biggest gripe so far.

It is ambidextrous, so there is one on both sides, but it is extremely difficult to press it.

Now, when you actually do activate the button, it does drop free and clear relatively easily. So I have no problem with that.

It’s just hard. I have to move my hand around the gun to get to the button, to press it, to get the magazine to drop.

It’s really a tough magazine release. I’ve asked my friend Harrison over at Harry’s Holsters, who has several of the FN 509 series pistols if a stiff magazine release is a common issue.

He says that the magazine issue is pretty much an across-the-board problem with these particular FN 509.

I don’t know if you want to call it a problem, but it’s a problem for me. It’s hard to get these magazines to drop free. Again, this is my biggest gripe on the gun so far.

The slide stop on this gun is on both sides. So, it’s an ambidextrous slide stop or slide release.

It’s actually relatively easy to pull. Just pulling it down on one side sends the slide forward without any issues whatsoever.

Pushing it up by one finger worked extremely well to lock the slide to the rear.

The FN 509 slide stop works exceptionally well, and I really don’t have any issues with it.

Overall ergonomics of the FN 509

When you first grip the gun, it’s got a good bit of weight to it. The slide and the barrel are clearly a very well-built and solid design.

Most of the weight is on the top of the gun. The polymer frame is very light, and it feels good in your hand.

When holding the FN 509, you definitely feel like you’re holding a good-sized gun, and I think that’s really going to help mitigate the recoil when we get around to shooting this later.

But really, the weight surprised me when I picked it up because it doesn’t look like it’s going to be a heavy gun at all because there’s so much polymer in the frame.

But the weight is really not bad. The weight comes in at 1.6 lbs. So overall, ergonomically, feels really, really good.

The trigger on the gun, as stated before, is much like the Smith & Wesson M&P series of triggers.

It has a mechanism in the middle where the trigger buckles in, and then you have to squeeze all the way to get the trigger to depress and fire.

The trigger has minimal take-up, probably about an inch or a half of an inch. You hit the wall, and the wall is very sturdy. You definitely have to really apply your poundage to get this trigger to break.

Overall, it’s a decent trigger, especially from the factory. Definitely not going to have anything bad to say about this. I definitely want to get some rounds down range and try it. We’ll get to that part shortly.

One of the nice things about the FN 509 is the rail.

It’s built-in. There are four 1918 Picatinny slots on it, so that provides you a decent amount of locking mechanisms for flashlights and other accessory attachments.

So, the rail is nice. It’s very well-defined and seems to be a nice feature of this gun.

The looks of the FN 509 are quite nice. It’s got very rounded corners, and there’s not a whole lot of hard edges.

The chamfer is very nice. The slide cuts are clean and defined. There’s obviously been a lot of time and energy put into making this gun look very professional.

The grip texture looks fantastic. There are actually three different kinds of texture on the grip.

All of them look very nice and really make the gun feel great in your hand, aside from just looking really, really nice.

Overall, very impressed with how FN designed this gun and made it look overall.

I finally got around to shooting the FN 509, and I must say I was impressed.

It remains on target extremely well with recoil. For a gun of this size, the recoil is manageable and, I would even say, minimal at worst. The grip texture does a lot to help mitigate the recoil of the FN509.

The only issue I have with the FN 509 is the same as mentioned above. Reloading the FN 509 is a pain, and the magazine and magazine release are hard to work with.

The FN509 is a good feeling gun. It’s definitely one of the polymer-framed guns I’d recommend to anyone.

The FN brand has a great name in the industry, and the 509 doesn’t disappoint. Grab one, borrow one, and try it for yourself!