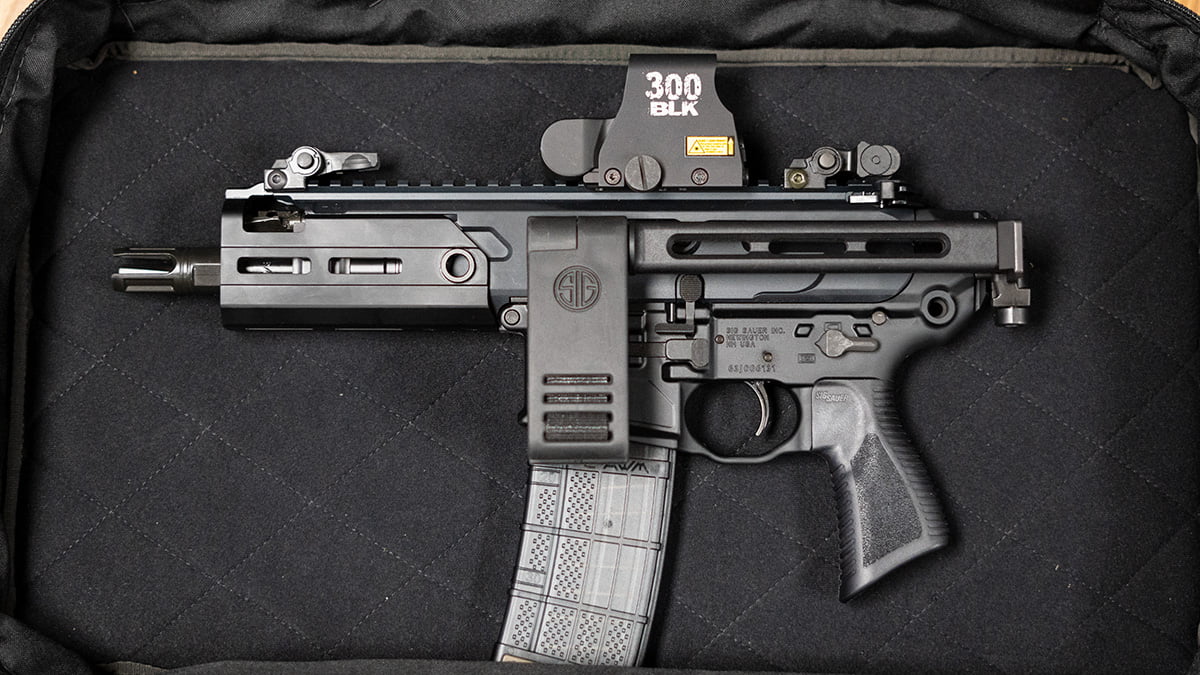 If you haven’t heard of the Sig Rattler, you have certainly seen it in use or on the big screen. The Rattler is an extremely popular PDW used by well-known government agencies like the United States Secret Service and most Hollywood studios.

The Rattler is a folding stock PDW chambered in 300 Blackout and 5.56 NATO. The more popular 300 Blackout model has been increasingly hard to find in recent months as the Rattler’s popularity continues to surge.

About the Sig Rattler

The Sig Rattler is part of Sig’s MCX line of guns and is likely their flagship or most well-known model.

Announced in 2015 and released in 2016, the gun got off to a bit of a rocky start, with some of the Gen 1’s being recalled because of the bolt carrier group.

However, the Gen 2’s have been widely popular, reliable, and adopted globally.

One of the main draws of the SIG Rattler is going to be the features. The gun carries the SIG Sauer name, which is well known and looks modern and somewhat futuristic.

But it all boils down to how it performs and what it brings to the table that other firearms don’t?

I will start from the back of the gun to the front. Beginning with the fact that this gun can be bought in either a pistol configuration or an SBR. The SIG brace on this gun is one of the only ones genuinely approved by the ATF as a stabilizing brace.

Now, with that being said, I disagree with that. But it is what it is.

The most significant feature worth mentioning about the stock or brace is that it is folding.

Now, the one that’s on this Rattler is the authentic SIG brace and to use this folding brace, you pull up and fold in.

To move it back to the extended position, you just do the same thing, pull up as close to the base as possible, pull around, you’ll hear it click, boom, done.

So there’s not much to say about the brace other than it works as a brace and does a decent job.

Time to move on up the gun to the grip.

The grip of this gun rocks is a customized SIG Sauer grip and if you’re familiar with SIG’s grips, they have an extremely aggressive angled bottom.

I’m not sure why Sig loves this massive angle, but I will say it does allow your full hand to get on the grip and then lowers the overall mass and weight possibly of the polymer grip.

So it’s pretty standard. The same grip is on my Copperhead. It works, it functions.

The side texturing actually is pretty nice. It’s very grippy.

Reminds me of the P320 and the P365 grip texture. SIG does seem to stick to that same texture. I think they found something that works and they’re sticking to it.

All right, moving up a little bit. Let’s talk about the safety of this gun.

The Sig Rattler doesn’t have many cons overall. But the safety is one of them.

I like the safety in terms of it works the only problem I have, and this is a problem that I see a lot with ambidextrous safeties, is if you have your finger riding above the trigger frame the right side safety will dig into your finger a little bit.

It’s not a huge deal, but it is something to note. The safety is a little stiff at first, but they do break in. I notice that very similar thing with the Sig Copperhead safety.

Now let’s talk about the trigger.

The trigger is a standard trigger. Now they do feel a little skinny to me, they’re not fat and wide like a lot of triggers are.

There is little take-upin this trigger up to the wall. The wall’s not squishy, definitely a clean break, but the reset is more defined than the break, and that’s not so bad.

It does work well. It’s just that would take some getting used to. But it works, it functions, and it’s not bad.

So we’ll work our way up and across this gun. The charging handle on this gun does have a small footprint.

It has dual wings to pull back, which you see on most charging handles.

It is a little stiff to pull the bolt back.

Keep in mind that this doesn’t have a buffer system. This is a piston gun, and it has a proprietary spring system that allows it to cycle.

So it will be a little stiffer than you would feel in an AR or something with an actual buffer tube system.

But it does work exceptionally well. The bolt does send home really, really quickly.

I believe Radian used to make a replacement for this, where you could use their Raptor charging handle.

I’m not sure that they still make those. But this SIG charging handle does seem to work well.

Moving onto the adjustable gas block. Being a piston-driven gun you get the benefit of not getting lots of gas blowback and suppressing this gun is going to be a much more pleasant experience.

You’ll get less gas back in the face and, in theory, should get less recoil.

But this gun comes with an adjustable gas block from the factory. It is extremely proprietary to the SIG MCX series.

They do not have it on the Copperhead because it’s gas blowback. So one nice thing I will say about this is you can’t screw it up.

SIG has engraved the plus-minus onto the gun’s frame. So, you know if you need less gas for suppressing, you’re going to turn it down.

If you need more gas, you’ll turn it the other way. It’s marked on the upper, so you can’t screw that up.

Speaking of upper, let’s talk about the hand guard.

The hand guard on this gun is different. I want to say it’s monolithic, but it’s not. It comes off the front; obviously, you can get to the gas block and the barrel.

Two screws are holding this onto the front; once you remove those, you can just slide the handguard off.

There are two M-LOK slots at the six, nine, and three o’clock positions and it comes with two QD adapters on the right and left side for a sling attachment

Let’s talk about the controls. Moving up the gun, we have very similar styled controls to an AR.

I want to compare this, so you have some reference. These controls remind me of the LWRC M6IC ambidextrous controls.

Their bolt release is the same style paddle you would see on an AR.

But on the bottom, there’s a little lever that you would hit to release the bolt. I believe they probably did this because of the size of this gun.

To keep all the controls compact and make this gun be as small as possible, they probably had to change that piece, just a hair.

So I think that’s where they went ahead and compromised.

But at the same time, I think that is better. You get more surface area left and right, especially if you’re going to hit it with your thumb, a nice design feature of the bolt release.

Moving on to the mag release. This is the ambidextrous part of the lower control group.

You have your standard right-side mag release. It’s a pretty good-sized button, maybe even a little oversized.

It’s rectangular, but with the corner cut off, that’s the best way I know how to explain it, and the right side reminds me of the pivot system on the LWRC, the same style pivot system you’d see on the Noveske N4.

Of course, again, it’s not quite the same size. The paddle’s a little different. But it does work great either way you go.

From my experience, the Rattler isn’t picky about ammo. It should shoot what you feed it. Here are a few good ammo options.

Anybody who’s anybody has a Rattler. They’re in movies, the secret service uses them, and special forces are using them. They’re just mission built. They’re rock solid.

But the only real thing that is a drawback is the weight. They are on the heavy side.

I could foresee SIG making a lighter version of this in the future. But I think for what they built here, there’s a reason that it’s so heavy. I’m sure they could cut some metal away and make it just a bit less stout.

But I think with the pressures of the 300 Blackout and the 556, you need to have a solid-built gun.

So, it holds up to the pressures of those rounds. But overall, it’s not so heavy that you can’t carry it for long periods.

It has nice built-in QD mounts for sling carry and is an excellent compact little package. You could throw it in The Policy, throw it in a backpack and run with it.

This is the 300 Blackout model with the 1:5 twist, but overall the SIG Rattler has made a name for itself.

There’s nothing I can say about the Rattler to take away from what it is. It’s a great gun. If you can afford it, I recommend it.

It’s not one that you’ll just want to grab and throw in your collection and just let it sit because it’s such an expensive item.

You’re going to want to run it. Many people may only be able to buy this gun for their one gun a year because the price point at over $2000, creeping toward $3,000.

But like the mantra always says, you get what you pay for. And I think with the Rattler, that will be the case.

Is the SIG Rattler worth it?

Yes, the Sig Rattler is an extremely high-quality gun and is feature packed. The price point is high but for good reason.

Is the SIG Rattler a pistol or SBR?

The Rattler can come in a pistol or an SBR configuration. So it can be either or.

Does the military use the SIG rattler?

Yes, many of the special forces branches have adopted the Sig Rattler for mission specific roles.