The 1911 is one pistol that has really held its own in the test of time. Many will say that it’s old and outdated and it’s surely not perfect. But it’s definitely a solid time-tested design. In recent years the 2011 has come on the scene but what is the 2011? In this article, we will look at the 1911 vs 2011 to note some of the differences.

First and foremost, the grip design is the biggest structural difference in the 1911 vs 2011. The 2011 grip is two separate pieces that come together whereas the 1911 frame is typically a solid piece of steel.

The second biggest difference in the 1911 vs 2011 is double stack magazines. We will talk further about the grip size and configuration but the double-stack magazine is really what makes the 2011 a 2011.

The third major difference is 2011’s are typically 9mm vs the 45 ACP 1911. This isn’t always the case but you’ll like to see more 2011’s in 9mm configured for competition-style shooting.

People used to believe that the 2011 was just reserved for STI, now known as Staccato.

The 1911 is also very similar to the Browning Hi-Power and if you are considering the two take a look at our Hi-Power vs 1911 comparison.

The trigger is different because the double-stack magazine has to pass through the trigger bow, thus you cannot use a 1911 trigger in a 2011.

The 1911 is actually called the M1911, also known as the Colt Government, it was originally created by John Browning, who also created the Browning Hi-Power, and later sold the design to Colt.

The reason the 1911 is called the 1911 is that it was released in the year 1911 and is thus where its namesake comes from. It is a semi-automatic 45 ACP caliber handgun that was extremely advanced for its day.

1911’s have come a long way since the year 1911 and their first introduction. Now a number of companies make 1911 variants and many are known to be “high end” or extremely custom and unique.

Browning even makes a really cool 1911 .22LR pistol. We did a full review of the Browning 1911 Black Label if you want to take a peek!

The 2011 is a modular framed 1911 that is light and has better recoil management.

Typically the 2011 is known to be smoother and better to shoot than a typically 1911 pistol.

Now made by a number of companies 2011’s were originally known to be made by STI and SVI.

The typical price difference in 2011’s and 1911’s can be substantial, sometimes even double. But the 2011 is known to be a high-quality firearm.

The 2011 is made up of three main components

This is different from the 1911 because the grip frame is a simple piece and the gun is only two main components.

The way a 2011’s build is different from a 1911 is that the grip frame attaches to the subframe. The grip frame consists of the grip itself, magazine well, and trigger guard.

2011 grip frames are normally made of polymer to reduce weight but the high-end models are also steel.

The 2011 is feature-packed and has a modern twist to a time-tested firearm design.

If you want to reminisce about the old days and have a true-to-form war pistol you may want to look for a 1911. Some companies are still making extremely high-end 1911’s. 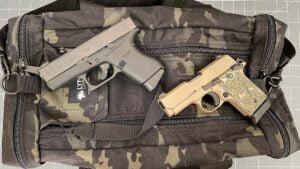 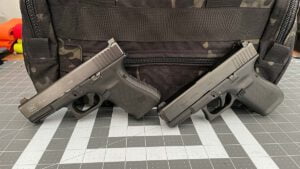