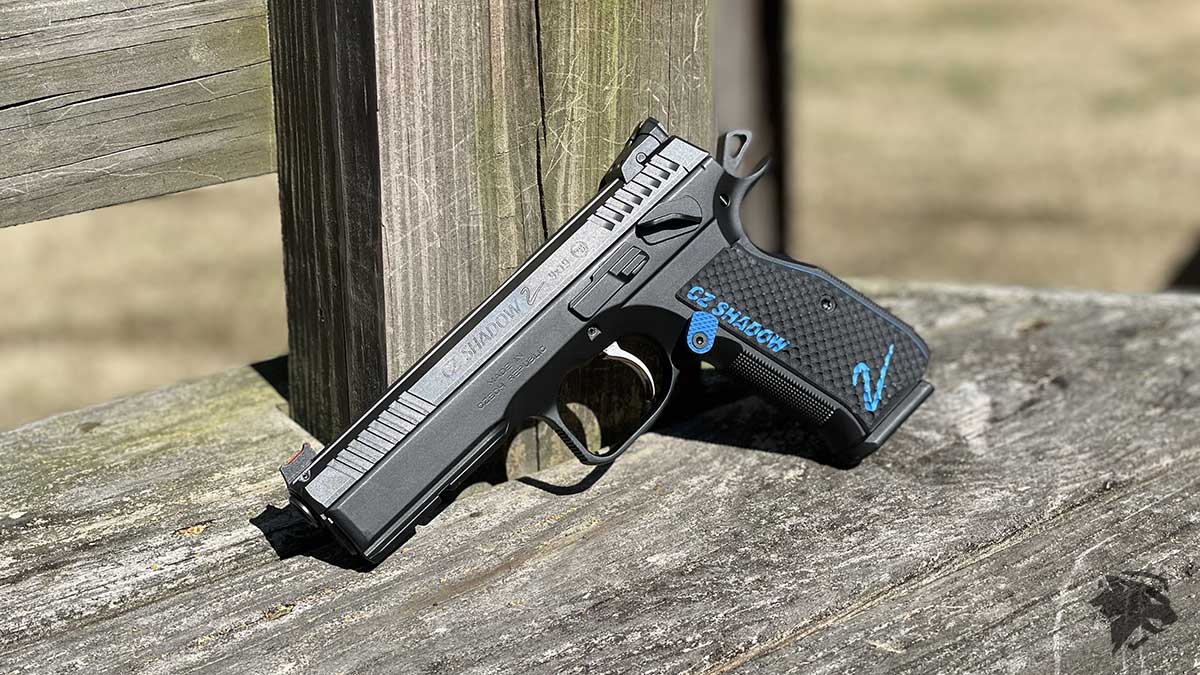 The CZ Shadow 2 is a specifically built competition pistol by Česká zbrojovka a.s. Uherský Brod or as we will call it in America, CZ. This Czech Republic company makes a number of guns, including the CZ Scorpion.

The CZ Shadow 2 is a stud pistol aesthetically and is THE most popular pistol in the USPSA Production Gun category.

Without further ado, let us dive into the CZ Shadow 2! The CZ Shadow 2 is a hefty gun. When you first pick it up, it feels great in your hand, but you’re definitely holding a heavy firearm, especially for a pistol. This is contrary to the typical gun manufacturer trying to go lighter, smaller, better, faster.

It fits great in your hand, and the ergonomics overall feel fantastic. You can definitely tell that this gun is poised to be more along the lines of a competition-style shooter rather than an everyday carry.

While you probably could every day carry the Shadow 2, it’s definitely on the heavy side for a concealed carry pistol and I wouldn’t do it.

The grips on the CZ Shadow 2 are quite textured.

The nice part about the grips for the Shadow 2 is their interchangeability. You can get custom grips in different colors of your choosing, like the ones pictured above.

On this particular model, it has aftermarket blue Lok Grips with blue accents. Even the follower in the magazine is blue on this Shadow 2.

The rough stippling-like texture of the grips provides for a fantastic grip of the gun.

It definitely feels like you’re not going to lose your grip and that you have absolute control over this gun.

The heavyweight of the gun plays a factor in the controllability feeling of this pistol.

The front and back of the grip also have a great textured feel to them included in the frame.

The front and back of the frame are not changeable.

The Shadow 2 magazine is a 17+1 configuration, Mec-Gar style magazine.

Inside the magazine, well, there’s some light flaring.

The gun frame is where most of the weight resides. It’s solid.

The frame on the CZ Shadow 2 is very thick and stout, but it is very, very durable. It’s definitely a solid-feeling gun, and it’s immediately noticeable as soon as you pick up this pistol.

The slide on the gun is slim. Most firearms these days have larger slides.

It allows you to get a lot of grip on the slide to rack it, pull it back.

The slide serrations are nice. The only difference on this, whereas normal guns or normal carry pistols have, is that it’s very much a smaller slide profile.

It’s very thin. It’s not even a full inch, maybe a half-inch of room to grab.

However, you don’t have many issues grabbing or racking the slide, given the serrations, but it definitely does not have the amount of hand space or grip texture that a carry gun like a Glock, Smith & Wesson, Sig or other carry pistols would have.

The sights on the Shadow 2 have a carbon fiber front sight and an adjustable rear sight.

They are adequate and pretty much on par with modern Trijicon sights or anything without rear dots, just a single front dot.

I really like that setup. Not a huge fan of fiberglass, but at the same time, this works really well. It looks excellent in the sight picture.

The slide release is one of the few gripes I have with the CZ Shadow 2.

It is not quite in the center of the pistol, but it is tough to get to around the safety.

If the safety is engaged, it’s not too bad to pull and release the slide.

However, I don’t think anybody with smaller hands will really love the placement of the slide release.

If you need to release the slide, having a slide lock, you’re probably going to have to move your hand around the gun to pull down the slide lock.

The slide lock’s not too stiff. It’s pretty good, but keep in mind that you will have a hard time with it if you have smaller hands.

The safety is interesting on this gun.

On the left side of the gun, a right-handed shooter is the most important side, as far as safety goes.

Clicking up into safe is extremely easy.

Pulling down from the safe position is extremely fluid.

It’s an effortless safety. There’s no pushback, and there’s no force.

On the right side of the gun, you have a flat-style safety that seems to work well. It’s doesn’t get in your way, doesn’t bite into your hand when you’re using that safety.

The hammer design is nice. It’s got good texturing on top, is clean and responsive, doesn’t have much binding, and doesn’t have any grit to it.

Being a double-action pistol, you obviously have two different trigger pulls.

One is extremely difficult to accomplish.

The single-stage trigger has a little bit of take-up. Maybe a half-inch, maybe more like a quarter inch

There’s no hard break like there would be on an AR-15 style gun. It is immaculate, smooth, and you barely feel it happening, making for a very smooth-shooting pistol.

In terms of IWB holsters, there probably aren’t many options for the CZ Shadow 2. I can’t stress enough how the Shadow 2 is not a concealed carry weapon.

Shooting the Shadow 2 is great. From the roller smooth slide to feeding the magazine well. This gun glides.

Once you start squeezing off rounds, you’ll notice that the heavy frame reduces the muzzle rise and your back on target with ease.

I’ll finalize this section by finding someone with a Shadow 2 and test drive it for yourself. It’s a tough thing to explain. It’s one of those “you just had to be there” moments.

Final Thoughts on the Shadow 2

If you are looking for a range or competition gun with the least amount of recoil possible, I believe you should stop looking and pick up a Shadow 2.

It isn’t your EDC gun, but it’s definitely going to be a gun that you take to the range every time. The Shadow 2 has a special place, and it’s the range or a match.

It’s an extremely effective gun, fits right into its niche, and doesn’t try to be a catch-all.

The Shadow 2 excels in comfort and accuracy and earns high marks across the board, shooting it 10, 20, and even 50 yards.

Because it excels where it should, it gets a 4.3 of 5 stars in my book. The CZ Shadow 2 is a specifically built competition pistol by Česká zbrojovka a.s. Uherský Brod or as we will call it in America, CZ. This Czech Republic company makes a number of guns, including the CZ Scorpion.