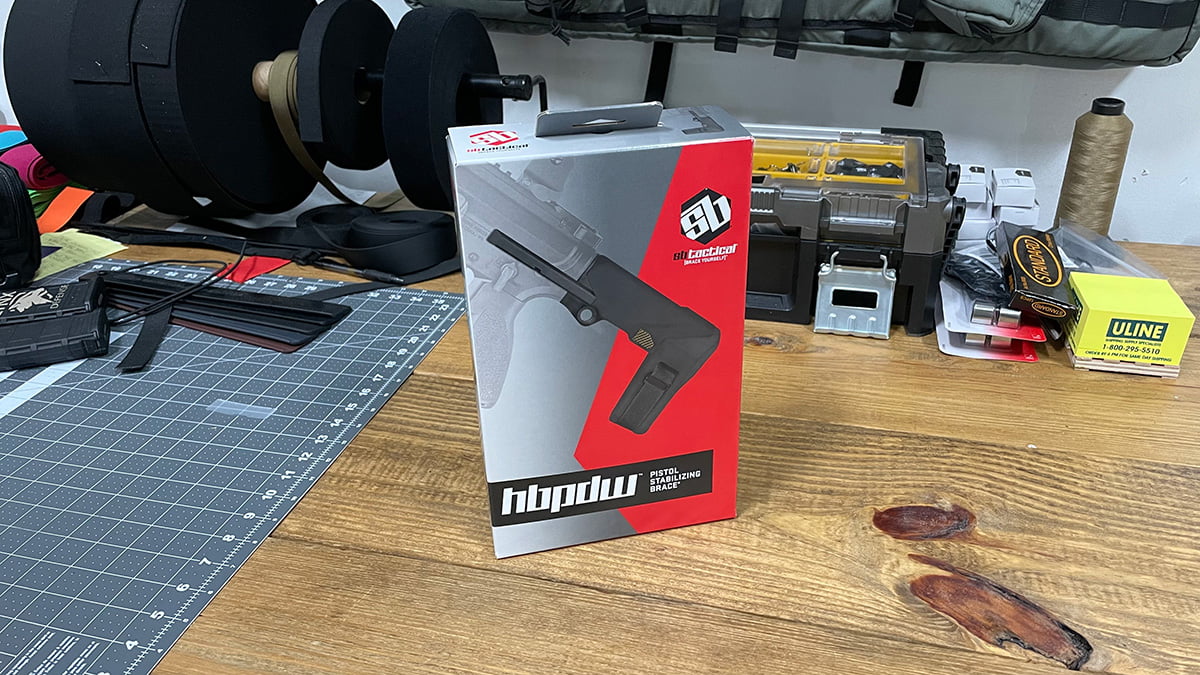 SB Tactical and Q have just released the new HBPDW brace, and it’s a near-exact copy of the Honey Badger brace. The brace is made for standard AR-15 rifles as well as pistol caliber carbines chambered in 9mm. The available colors are black and gray (even though the gray model has yet to been seen).

I picked up the HBPDW Brace for my Aero Precision EDC-9 build I was working on.

Why is the Honey Badger Pistol Brace so special?

The Honey Badger brace is much lighter and shorter than nearly any brace on the market. It’s great for making your AR pistol small and compact.

There are a number of other braces with similar designs but it seems like Q and SB Tactical have perfected the design to have a streamlined and clean brace design.

The function and aesthetics of this brace set them apart from the original PDW brace that SB Tactical created.

What does the HBPDW Brace come with?

The nice part of the HBPDW Brace is that it comes with everything you need. Since it is a proprietary design, the right weight and spring had to be included.

In the box, there is:

After opening the box, the HBPDW brace was nicely packaged and very minimal.

I opened the box, spread out all the parts, and immediately understood the price point of the braces.

There is a proprietary castle nut wrench and included blue Loctite.

It quickly read through the directions and then studied how the brace would go on the gun. It took me a minute to realize how it worked, but it was pretty easy.

The tube easily comes off of the brace extension, and you screw the buffer tube on the gun and use the included blue Loctite to secure it.

The only tools you need are a socket wrench and a long screwdriver to turn the castle nut wrench.

HB Tactical covers the install in this easy video. Naturally, I didn’t know about the video until I already had mine installed.

How does the SB Tactical HBPDW brace look extended?

I was skeptical about the rails the brace live on at first but they seem well constructed and the two position option is a nice addition that the Honey Badger Pistol doesn’t have.

How does the HBPDW Brace look collapsed?

My favorite configuration of the HBPDW brace is collapsed. It’s a much cleaner design than most collapsable stocks on the market and features thin guide rails and a large easy push the release button.

The HBPDW stock collapsed is really where this brace shines. It allows you to make the gun extremely compact and the smallest possible package.

Should you buy the Honey Badger Pistol Brace brace?

Let’s face it, this brace isn’t cheap, but personally, I think it’s worth every penny. The quality, look and feel are all top-notch.

Looks aside the function of this brace is out of this world! It makes your gun extremely compact and the fit and finish are both great.

After using this brace for a few weeks now I couldn’t imagine using anything else on this gun.

The SBA4 is a great brace but if you have a PDW this brace is almost a requirement.