The 222 Remington was created in 1950 by Remington and was the first commercial rimless .22 cartridge made in the United States.

The 222 Remington is a unique cartridge in that it has no parent case, whereas most of the cartridges we have covered to date have a parent case that they originated from.

The 222 Remington is a rimless bottleneck cartridge that has been an extremely popular target round until the 1970s.

However, with the invention of the 223 Remington cartridges, this round has really lost its shine in the modern cartridge landscape.

The 222 Remington round was originally made for the Remington Model 722, which is a bolt action rifle.

The round was quickly adopted for varmint hunting and bench shooting but has since been replaced by the faster 22-250 Remington and .220 swift rounds.

The 222 Remington round is not extremely popular in the United States but remains a popular round in many European countries.

The .222 Remington performance is only slightly less than the more common 223 Remington.

This is likely why the 222 Remington was abandoned for the 223 Remington. Both bullet diameters measure in at .224 inches.

There are very few guns on the market today that feature the 222 chamber, you will likely have better luck on the used market locating a 222 Remington gun.

The Remington 700 is as iconic and American as McDonald’s. So it’s no surprise that Remington made the 700 for its 222 round.

The 222 Remington was mostly made for bolt action rifles but the 223 Remington was quickly the love of most shooters and military.

Since the release of the 223 Remington very few manufacturers chambers for the 222 round.

If you do find 222 ammo it’s typically extremely limited and extremely expensive due to its scarcity.

You can check some of the larger hunting-based stores like Lucky Gunner, Sportsmans Guide, Optics Planet, or Sportsmans Warehouse for in-stock 222 Remington Ammo.

Grab a gun also offers a wide selection of 222 Rem ammo whether it’s in stock or not will depend.

One of the easiest ways to restock your .222 rounds is to reload them yourself. Doing this is an extremely time-intensive process so if you want to get started reloading be ready to study up and get ready to spend some time.

Nonetheless, you can easily find reloading supplies for the .222 cartridge.

Lee Precision Dies is probably one of the most popular due to their reloading presses being affordable and readily available.

With rounds like the .222 Remington a lot of questions come up. Here are some of the most asked questions.

While the .223 round has eclipsed the 222 round it is still widely renowned as a great bench rest shooting round.

You can also find 222 popular among varmint and predator hunters.

Do they still make 222 Remington?

Yes, 222 Remington ammo is still in production today. It is largely still made for the European market as new rifles are rarely chambered in 222 Remington. 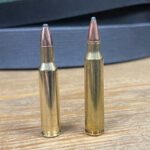 The bullet drop profiles on the two rounds will also be slightly different since the bullet weights are different for the two.

What happened to the 222 Remington?

222 Remington Magnum and 223 Remington both excelled while the 222 Remington fell out of popularity with the military and civilian markets.

Want to learn about another popular round very similar to this cartirage? Take a look at the .22-250 Remington.