An ammo blast from the past would definitely be the .30 Carbine. This round is one that’s popularly and use has really fallen since its inception but is still being manufactured and used in a number of firearms.

The first .30 carbine cartridges were made by simply turning down rims on the .32SL (.32 Self Loading) cases and using the projectiles from the .308 round.

This gave the round a similar profile to the .45 ACP bullet that the US Military was using but the .30 carbine has twice the amount of muzzle energy as the .45 ACP.

.30 Carbine is a rimless centerfire rifle cartridge that is used primarily in the M1 Carbine and was introduced in 1942. The original intent of the round was specifically for the M1 carbine.

The 30 Carbine cartridge is still in production today and is made by a number of different manufacturers including Hornady, Remington, Federal, Tula, and more.

The round was originally manufactured by Winchester but upon its adoption by the US Military, many other manufacturers began making the cartridge.

The .30 carbine round was originally released in 1942 and is a direct result of the US Army’s “light rifle” program which eventually produced the M1 carbine.

The Army required a cartridge greater than .27 with a range of 300 yards or better out of an 18-inch barrel.

With these requirements, Winchester made a .30 caliber cartridge with 100-120 grain bullet with a velocity of 2,000 feet per second.

The first 100,000 of these Winchester cartridges had the headstamp “.30 SL” with the SL standing for self-loading.

The .30 Carbine round was in active military service in the United States from the 1940s to the 1970s.

According to some sources, the .30 Carbine is still in active military service in some countries, including South Korea and Taiwan.

The 30 carbine rounds purpose was to create a round that had a range of 300 years or more from an 18″ barrel and be shot from a light rifle that was being developed, the M1 carbine.

The military used the M1 carbine during WWII where many soldiers complained about the carbine’s lack of stopping power.

This was likely due to two major factors. First, the round was known to punch through its target rather than tumble or expand on impact, even with a soft tip or hollow point rounds.

Second, the enemy during WWII was known to be under the influence of amphetamines giving them almost super human-like abilities.

In long-barreled rifles, full metal jacket bullets don’t expend very well and not nearly as well as a soft tip or hollow-point bullets.

The bullets themselves are often known to over-penetrate.

The .30 carbine round is used for hunting small to medium-sized game but isn’t extremely popular hunting round and is more directed toward collectors and hobbyists. The 350 Legend is a newer straight-walled hunting cartridge that is far more popular in 2022.

The most notable gun that shoots .30 carbine ammo is the M1 Carbine.

The .30 carbine cartridge is still pretty common in the US since over 6 million M1 carbines were made during WWII.

The M1 Carbines were solid in mass after the war often for as little as $20 each. This made the M1 incredibly popular with gun owners in the US.

Currently, the only company producing modern remakes of the M1 carbine is Auto-Ordnance and it, like the original, is chambered in .30 Carbine.

Some other firearms have been made to shoot .30 carbine such as the Taurus Raging Bull and the Ruger Blackhawk, both of which are revolvers.

.30 Carbine is one ammo that is still relatively easy to find.

Due to the M1 Carbine’s popularity in the sporting and collecting circles civilian demand for the .30 carbine cartridge is still relatively high.

While this ammo isn’t widely used it’s still readily available and still in production from some of the major manufacturers around the world.

30-30 is a popular hunting cartridge that is rimmed and bottlenecked.

No, .30 carbine is much different around than .300 AAC Blackout.

While both of these rounds are 30 caliber they are wildly different in that 300 blackout is a necked down 5.56 round and the .30 carbine is a neckless round.

The .30 Carbine round was made for the M1 Carbine which was 8 inches shorter and almost 5 lbs lighter than the larger M1 Garand which was chambered for the more powerful 30-06 caliber.

It had a much longer effective shooting range than the .45 ACP pistols that were carried by support troops.

The round caught a bad wrap during the Korean War, where the M1 Carbine and the .30 Carbine cartridge saw most of its wartime use because troops stated they would shoot the Korean and Chinese troops with no effect.

As it was mentioned earlier it was likely due to poor shooting or other influences, such as amphetamines, that made the Koreans and Chinese seem like they were unphased by the rounds. 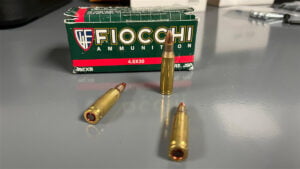 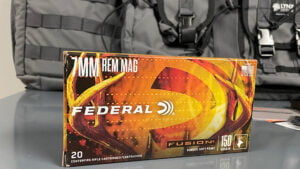 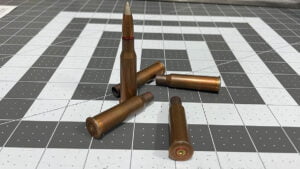