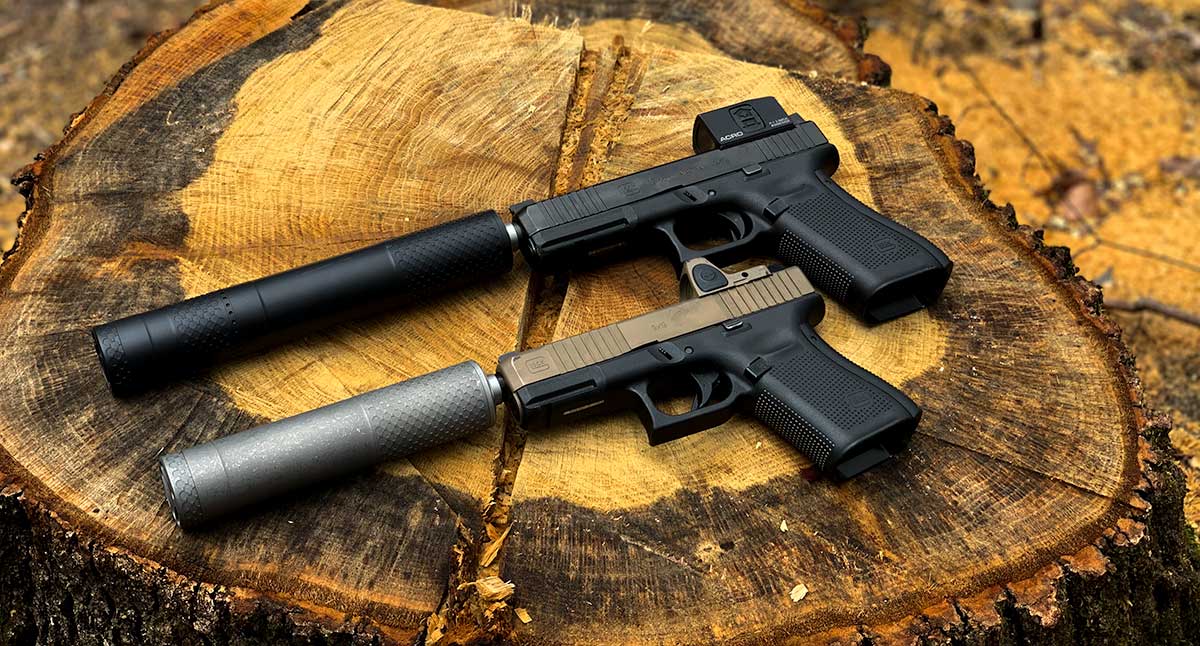 Microtech is a company known for its knives and specifically the OTF (Out-the-Front) knives.  Some might even call them the Rolex of the knife world. Their knives aren’t always the easiest to find, and they almost always go up in value over time.  Microtech is always changing up the details on their knives, making each production run unique from the next. It’s a company known for attention to detail.

But what some people don’t know is the spinoff Microtech Defense line that produces the R29K 9mm suppressor.

The suppressor is a multi-piece design, so you can run it in full size or K configuration.  The Microtech R2K9 can be run either dry or wet and comes with a piston 1/2×28 threaded pistol to run on Browning tilt lock firearms, like the Glock 17 Gen 5.

It also included an M13.5x1LH piston if you’re running a European pistol with a common metric thread pitch for factory barrels from manufacturers like Canik, Glock, HK, Sphinx, and Walther.

It’s a nice option but the 1/2×28 is becoming more popular even on European guns, like CZs and HKs.  It also comes with a spacer, so you can disable the piston and use the Microtech R2K9 on a Sub Gun or PCC like an HK SP5 or Sig MPX.

The R2k9 comes in a Nantuk case that is cut specifically for the R2K9 and its components.

The suppressor comes in two pieces that you easily screw together to complete the suppressor. The way the suppressor is laid out makes it easy to break down and store in whatever configuration you prefer.

Microtech uses the same level of attention to detail on its suppressors that is used on their knives. The design of the outside of the can has a nice pattern that’s extremely abrasive, which allows you to grab ahold of the suppressor and twist it on or off extremely easily.

The Microtech Defense logo and information is etched into the side of the can and includes the can’s serial number and all of Microtech’s business information.

The can comes in three different colors: black, apocalyptic, and coyote. I was fortunate enough to be able to see the black and apocalyptic in person. I personally like black, it goes with everything. But the apocalyptic is an extremely durable finish and looks great. I think it would be the best option for someone who’s going to be rough, or at least not baby the can.

The Microtech R2K9 has square-patterned texturing on the rear of the main suppressor body and on the front of the full-length extension. Not only does the texture look incredible, but it also gives you a better grip on the suppressor for assembly or disassembly.  It really helps when ensuring the silencer is mounted tightly on a threaded barrel.

While I don’t have any sound measuring equipment or the knowledge to even gauge the actual dB levels of this suppressor, like Jay from Pew Science does, so I won’t even try to address the noise level of the R2K9.

I have not shot the suppressor wet yet, but I will update this post when I get the chance to do some testing.

Adding a suppressor like the Microtech R2K9 to a pistol changes how it shoots. You’re hanging a lot of weight off the end of the muzzle, and it really helps stabilize the gun. That stabilization increases your ability to shoot accurately. If you were to throw the gun in a random rest and take out the human error, I have no idea how the suppressor would affect a 9mm handgun at a reasonable distance of 25 yards.  But it definitely makes the gun easier to shoot accurately during a slower pace of fire.

Firing under-speed, it’ll slow most shooters down; although that could be more a result of familiarization and time behind the gun than an actual physical disadvantage. If someone shot an equal amount suppressed as they did unsuppressed with a given platform the suppressor might still hold an advantage shooting it under speed.

As far as pistol suppressors go, the Microtech R2K9 is a fantastic option but it definitely comes at a high price of $1,500 MSRP.

The R2K9 definitely surprised me because I’ve always thought of pistol suppressors as range toys since they aren’t a practical carry option.

But as my buddy, Harrison, said it makes for a great home defense/protection option if you want a light weapon that would give you access to a free hand.

Is it worth the price? If you’re someone who says your Timex tells time as well as your friend’s Rolex Deep Sea, then this probably isn’t the can for you.  But if you enjoy the finer things in life and don’t mind paying a premium for them, the Microtech R2K9 is likely a perfect 9mm suppressor for you.