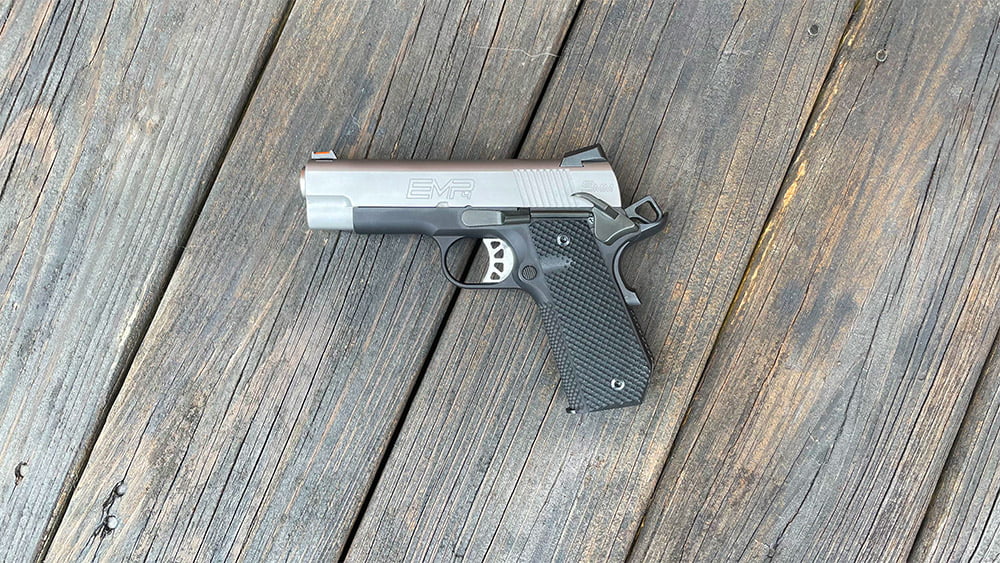 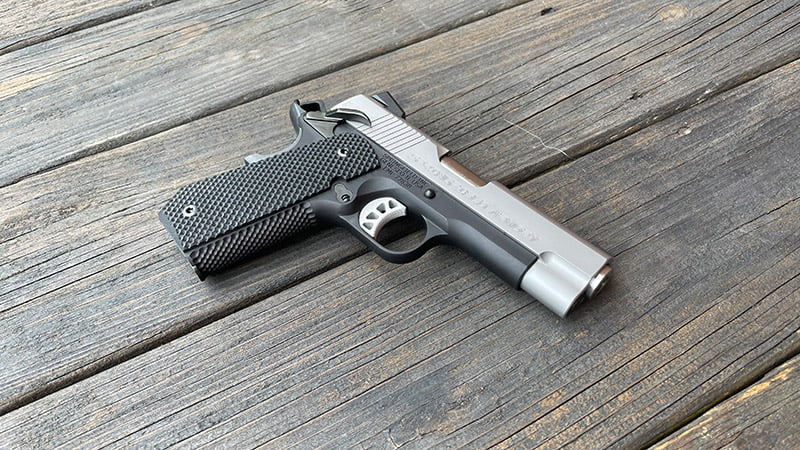 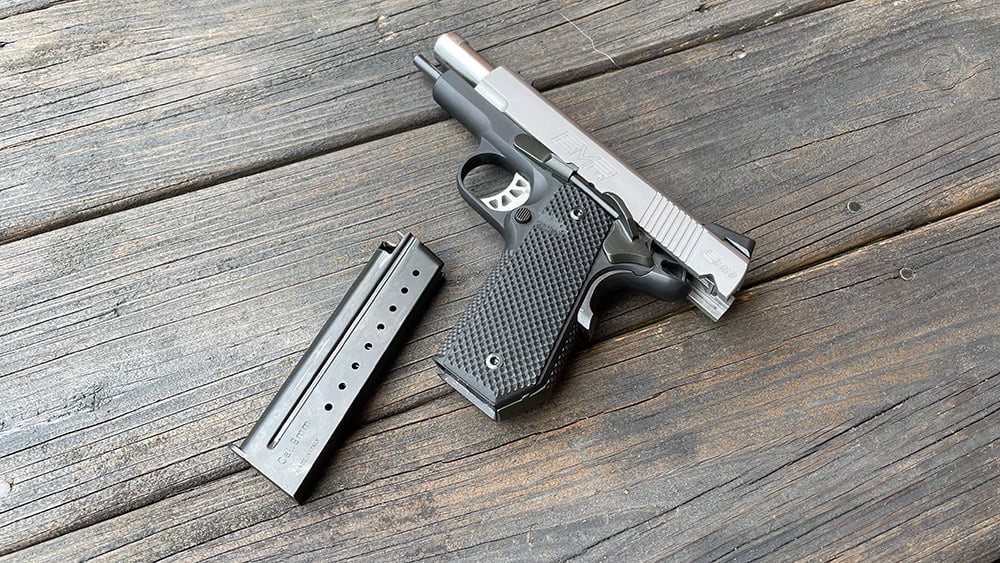 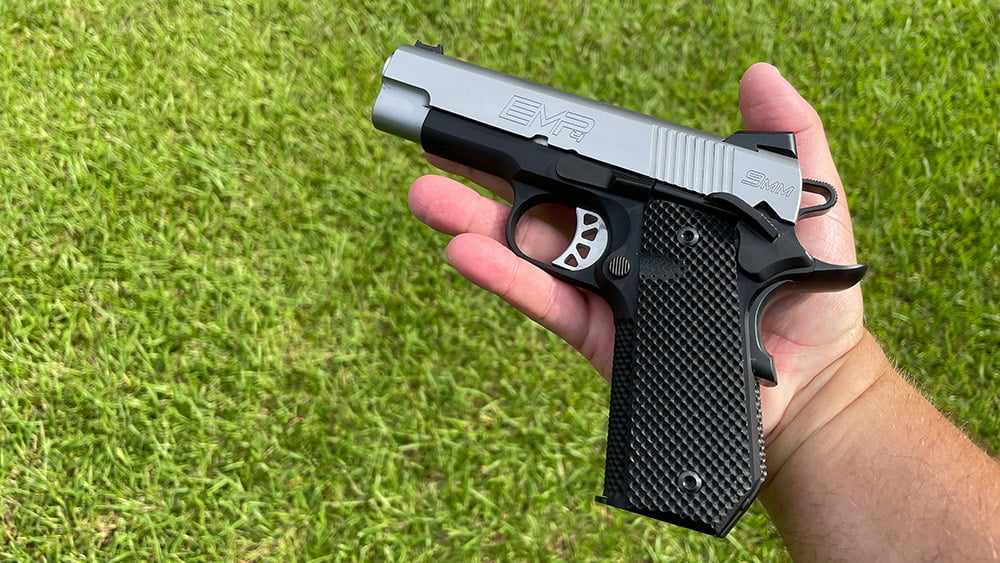 First released in 2006, it is still manufactured to this day and continues to be a popular offering from Springfield Armory. You can also get the EMP in .40 Smith and Wesson, 45 ACP, and 9 mm.

We’re going to take a look at the Springfield Armory, EMP4 9mm. Many people compare this gun to the Para Ordnance, Slim Hawg, or the Colt Defender. Two prevalent 1911’s in this class.

The feature set on the Springfield Armory EMP4 is what you’d expect from a 1911 pistol, slim frame, single stack.

The first thing you’ll notice about this grip is it’s a little dated in its design.

There are many newer designs and styles etched into grips and frames compared to this box crate design. Something like the Staccatos, even the SIG 1911, or Para Ordinance, which are no longer being made, seem to have a better grip texture than the EMP4.

That being said, it’s not awful.

It does provide a lot of grip, but it is not the most comfortable. It’s very abrasive, which is the point, but it could be a little more comfortable.

The EMP4’s have removable grips and remove with two screws on each side.

However, on the front of the frame and the back of the frame, those textures are likely not going to change unless you did some serious milling work.

The ergonomics of the gun are good. Once you grab it, since it’s a single stack gun, it fits really well in your hand.

The best thing I can equate to is grabbing something like a single stack 45 1911, or even a smaller frame Glock 43 or something with a minimal round count in the polymer-framed world.

Since I have small hands, this gun actually feels really good. So I won’t knock it there.

Lastly, the grip is abrasive, which will help you control it while firing, especially firing in cadence.

The sites on the gun are tritium filled on the rear and the front is fiber optic.

They are adjustable. There’s a single-set screw on the rear sight.

The front sight, it looks like you can probably get that out with a special tool once you take the slide off the frame. So you will need to clear the slide from the gun’s frame to access the front site.

The sight picture is really good. They remind me of the Trijicon style sights that I have on a lot of my Glocks.

The rear sight looks like Glock stock rear sights. The rear dots are definitely just a standard two-dot configuration, and the night sights on the gun work well under low light.

Like most 1911’s the safety on the gun only works when the hammer is cocked. Articulating the safety with the thumb is a breeze.

I’m right-handed, so I’ll use my right thumb to push up and to deactivate safety.

When the safety is down, I actually really like the fact that my thumb sits right up underneath the safety lever while I’m gripping the gun, and I can easily switch it up or pull it back down.

I don’t think this is going to get in the way while shooting. I don’t move my thumb around a lot.

The recoil of the gun, isn’t going to accidentally bounce the safety into place.

Even if it does, you’re talking about half a second to get it back down and to fire.

I can’t say enough how I really like how the safety lever actually sits alongside my finger and follows your knuckle and your thumb down the flow of the gun.

The magazine release on the gun is not ambidextrous.

It is single-sided, set up for a right-handed shooter.

The design is a small circular dot with little cut serrations in it, nothing too special about it.

There is a small spot on the grip that is not textured where it looks like your thumb falls into place and allows you to hit the magazine release.

The magazine release works well. No problems with it; as soon as you hit it, the magazine shoots right out.

No problems dropping free, even with an empty mag.

The slide stop on the EMP4 is only on the right-hand side, so it’s not ambidextrous, but most 1911 aren’t.

I wouldn’t expect it to be. That’s not a con, just stating an observation.

It’s straightforward to lock the slide back, but you’re probably not going to get it to pull down with the magazine in.

When the magazine is out, and the slide is to the rear, you can easily pull down on the slide stop.

However, if the magazine’s in, you’re probably not going to be pulling down on the slide stop to send the slide home.

The trigger on the Springfield Armory, EMP4 9mm, is a pretty basic 1911 style trigger.

Almost like it sits on a glide rail. You squeeze until it comes back, the hammer drops, then the reset is all the way back out.

There’s an absolute wall and the wall pretty much leads you to the brake.

Like most 1911’s, this is a single-action pistol. You do have to have the grip frame safety depressed to fire.

It wouldn’t be a Lynx Defense review without mentioning our range bags and how these guns fit in our range bag.

Since this is a single stack, 9 mm, 1911 framed gun, it slides into our standard magazine pistol pouch pockets great. No problems there. As for magazines, you could hold as many magazines on our carrier as it will fit.

The aesthetics of the EMP4 are pleasing. This model has a stainless steel slide with a black frame.

The accents are very nice.

The trigger and barrel match the slide. So it looks extremely balanced.

It has a stainless steel barrel and everything fits together really nicely.

The engravings, the EMP, the 9 mm, even the Springfield Armory on the side are just deep enough to create a great look. They’re nice and flat to the touch.

Lastly, the rear serrations are easy to grab and cap off the look of the slide nicely.

Shooting the Springfield Armory EMP4 9mm was actually quite nice. You would think it would have a lot of muzzle rise and a lot of recoil.

However, I was able to get back on target quickly and after the first two or three initial shots, I became accustomed to it.

Most of my shots after the first couple were on target hits, and I didn’t have any further issues.

In summary, shooting the EMP9, it’s actually quite fun, especially for a single stack 1911. The only thing is you’re going to have to reload probably more than you want, but no big deal. It’s still a lot of fun to shoot. 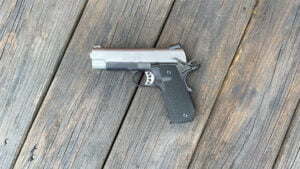 Editor's Rating:
3.3
If you liked our review we would appreciate a share!