The 4.6x30mm round is not one that you will likely walk into your local gun store and buy off the shelf, nor would you likely need to.

This round was specifically developed by H&K and has very limited use worldwide.

The round is a direct competitor to FN’s 5.7x28mm, which is used in the Ruger 5.7 and the FN FiveSeven, the 4.6 round was originally developed for a semi-automatic pistol that H&K was developing.

This pistol was ultimate scrapped and the round is now only used in one of H&K’s newest guns, the MP7.

PDWs were small and needed small but powerful rounds to make the guns make sense ballistically.

The performance of the round is what makes the 4.6×30 mm round so attractive for personal defense weapons. The extra small size of the round makes it easy to squeeze in a small gun and deliver higher foot-pounds on target and muzzle velocity.

The muzzle velocity varies depending on grain weight but it current stays between 2,200 – 2,410 feet per second.

The muzzle velocity is almost double that of 9mm and maintains similar energy on target as 9mm.

The 4.6×30 round is unique because it is a cartridge that as of this writing there are only two guns in the world that chamber this round.

While there might be some more guns in development the only two are the H&K MP7 and the incredibly fun CMMG Banshee.

The most popular gun that shoots the round is the H&K MP7. This gun hasn’t been around very long and wasn’t the gun the round was originally designed for but this gun was developed around this round.

The MP7 is not a gun you’ll likely see in your local gun store it is a gun that is currently only available in select fire (Full Auto) and currently is only available to licensed dealers, law enforcement, and the military in the United States.

There are hopes that HK will make a civilian legal MP7 in the near future because the gun looks fantastic to shoot.

I was lucky enough to shoot the CMMG Banshee in 4.6 at the Palmetto State Armory Gathering event.

While I don’t think the Banshee in 4.6×30 is wildly innovative I do think it puts more spotlight on this round and will likely cause others to give it a second look.

Without ammo, the guns are just hunks of pointless metal and thankfully the 4.6×30 ammo can be found, even if it is a rare item.

This ammo is one of the harder ones to find as it doesn’t make a ton of sense for retailers to stock and with its extremely limited use, it’s expensive and takes up valuable space to store.

I was able to locate 4.6×30 ammo in stock at Brownells which was a little surprising to me but with their vast selection, I wasn’t shocked.

As with any new caliber in a gun popularized by pop culture, there are a number of questions that a frequently asked.

What round does an MP7 shoot? 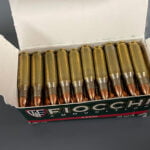 The H&K MP7 shoots the 4.6x30mm round that was developed specifically for PDW weapons like the MP7.

The H&K MP7 and the CMMG Banshee are the only two guns currently in production that are 4.6 guns.