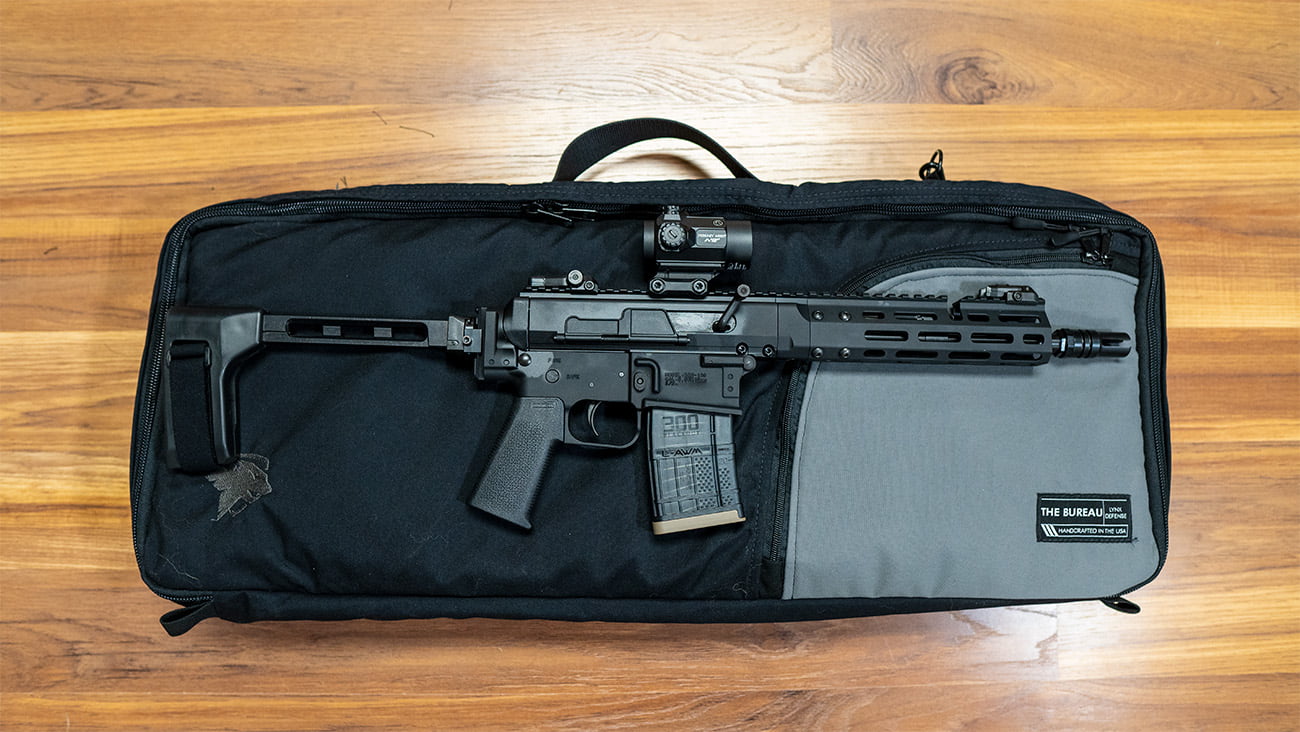 The Brownells BRN-180 is an awesome combination of a classic and modern design coming together.

The premise of the BRN-180 is to modernize the AR180 that was released in the 1960s and release it with upgrades from the lessons learned from the AR platform over the years.

The BRN 180 was created by Brownells with the help of PWS and FM Products. It’s pretty obvious that PWS brought their experience with piston systems to the BRN-180.

While FM Products likely is the company making the lowers and/or uppers. The concept of the AR180 dates back to the 1960s and was originally the Armalite 180.

The Brownells BRN-180 takes the modern AR-15 style lower and pairs with with a PWS Short stroke gas system and all of the advancements of the last 60 years.

The BRN-180 is an interesting product in that you can buy just the upper and slap it on any AR-15 mil-spec lower and you’re off to the races or you can buy the Bronwells specific lower and put the BRN-180 upper on it.

Good news for you this review will cover both the upper and the lower separately.

Time to dive into the upper and what makes it unique.

The BRN-180 upper is really what makes this rifle special. The upper is a pistol drive buffer-less system.

It also features a reciprocating side charging handle which is rather unique on an AR-15 platform.

I’m going to run down the upper muzzle to butt.

The muzzle break on this gun isn’t a standard A2 muzzle device, which is a nice touch. The coating matches the rest of the gun and is well done.

The muzzle design itself stops downward blast and pushing the muzzle down by venting the gas up.

I like the muzzle and it looks great but since I bought the .300 Blackout version I have to suppress the BRN-180.

The handgaurd is a sleek clean MLOK rail with a cut in the top about 4” from the front.

The top is a standard 1913 rail and the handguard is attached to the receiver with four screws.

It feels great in the hand and this 10.3” version has fantastic balance.

It has a unique forward design that allowed you to reach up and grab the the charging handle and rack the bolt extremely easily.

The charging handle functions nearly the exact same as an AR-15 but design wise it is widely different.

The ejection port on the BRN-180 is longer and wider than a gun in this category.

The locking and unlocking mechanism works the exact same as an AR-15 port cover.

Having the port cover is probably more important on the BRN-180 than an AR-15 because the opening leads right to the back of the bolt and the bolt springs.

One of the major features of piston systems is the ability to regulate the amount of gas that blows back into the pistol system.

The adjustment knob can be accessed on the BRN 180 handguard via a cutout in the froint of the handguard.

It can be adjusted by removing the clip and using nearly any small tool to rotate the adjustable knob.

With three major calibers the BRN-180 comes in:

I went for the .300 Blackout because I felt that made the most sense for me with a piston AR-Pistol.

The hot upper to get right now is the 7.62×39 and for good reason, that thing is amazing.

The BRN-180 lower comes in two different flavors. First, the BRN-180M lower which is a more modern style lower that you’re use to seeing.

The 180M still has the rear picitanny mount rail built in but it’s got all the updated mil-spec looks. So, I guess, the M stands for Mil-Spec. But I just perfer to call it the 180 Modern.

The BRN-180 lower that I grabbed is the standard lower that pays homage to Eugene Stoner and Arthur Miller’s original AR-18 rifle designed in 1963.

You notice the most difference in the lower in the magazine well and the rear of lower where the buffer tube would normally go.

The safety on the BRN-180 is compatible with any AR-15 style safety selection switch.

You can use anything from the stock mil-spec safety to the Radian Talon safety selector. It’s completely up to your taste.

Since Brownells does not sell the guns complete you will have to build out your lower so if you don’t just buy a complete lower parts kit, grab your favorite safety for the BRN-180.

The trigger well on the BRN-180 lower is a bit different that what you’ll be use to from a Mil-Spec lower.

The trigger well on the 180M lower meets the magazine well much like you would see on any modern AR-15 lower.

It also has a built in trigger guard that is very thick and visually appealing.

For someone who is use to the modern AR-15 lowers this will seem odd and out of place. But I love the throw back lower and wouldn’t change a thing about it.

The magazine well is probably the biggest visual and design difference in these two BRN180 lowers.

As you can see in the images at the beginning of this section the BRN 180 M lower has the more modern magazine well.

The BRN throwback lower has the reduced size magazine well and does take some getting use to when coming from the standard lower magazine well.

The stock and/or brace attachment is built right into these lowers. All you will need is a picitanny attachment system for your brace or stock and you are off to the races.

If you want to make this gun a pistol I recommend the SB Tactical 1913 folding brace.

I currently run a BRN 180 pistol until I SBR my gun, at which time I’ll run the JMAC Customs SS-8R.

If you are looking for the perfect BRN-180 case you can look no further than the Lynx Defense Byte or Bureau.

The main image of this BRN-180 review is a picture of the BRN on top of the Bureau bag.

The Byte is perfect for a folded BRN-180 or a pistol configuration with no stock. If you are looking for a high-quality American made case look no further, you’ve found it!

When I first started shooting the BRN-180 I was shocked at how smooth the overall gun shot.

The charging handle does reciprocate which is kinda annoying but that is quite literally my only complaint about this gun.

It’s extremely flat shooting and no gas back in your face.

I plan to suppress it and once I get my suppressor for the gun I will update my review.

If you want to grab some .300 Blackout check out these deals.

After shooting the BRN 180 I fell in love with it. I know, I know, how cliche to say that about a gun.

But I built this sucker from the ground up (oh, and this isn’t a sponsored post I paid for everything on the BRN 180, upper and all) and I wasn’t really sure what to expect.

I don’t think I can recommend this gun enough. The only downside would be that the charging handle reciprocates.

The BRN-180 might raise a lot of questions that we didn’t answer in the review. Here are some of the most common ones and if you have more please feel free to ask them in the comments and we will do our best to answer them.

Yes, the BRN 180 is a fantastic flat shooting gun that is perfect for a number of different applications.

No, the BRN-180 is a bufferless weapon system and does not have a buffer tube.

Who makes the BRN-180 for Brownells?

Brownells has partnered with a few different companies to bring the BRN 180 to life.

The piston system is made by Primary Weapons Systems for Brownells.