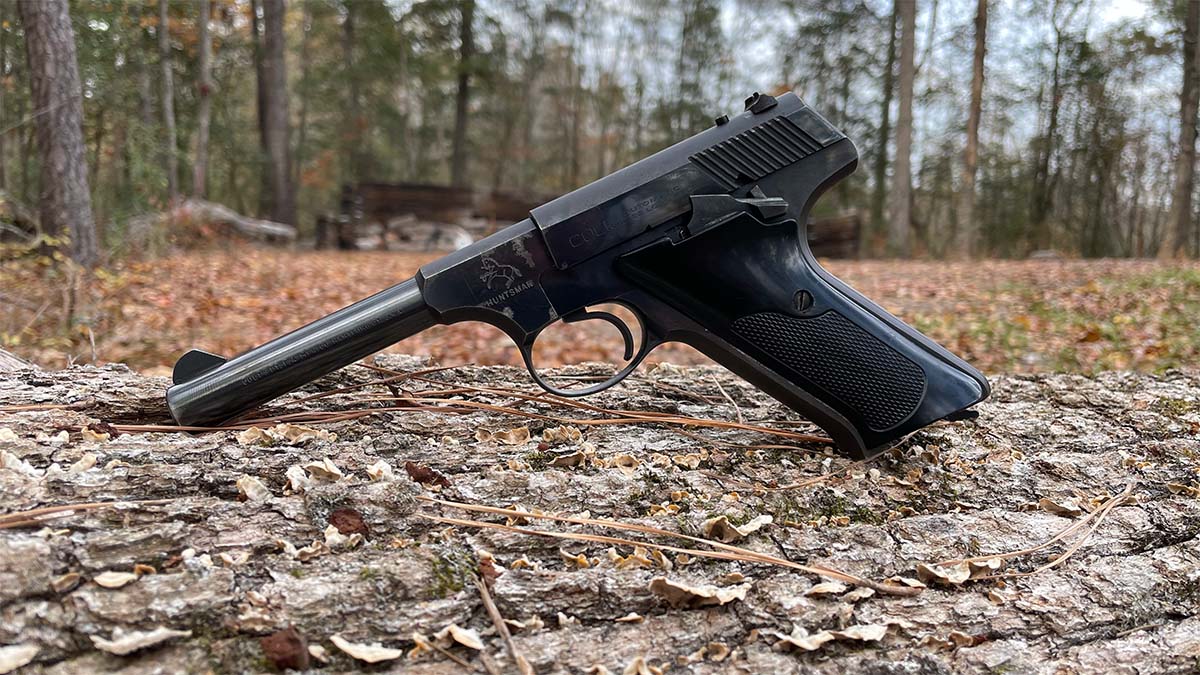 The Colt Huntsman pistol holds a special place in my heart. It is one of the first guns I ever remember shooting and the gun my dad was able to break my fear of guns and start my 30-year love affair with firearms.

Needless to say, the Colt Huntsman has a special place in my heart but that doesn’t mean the gun doesn’t come with drawbacks.

Let’s dive into the review of this classic.

History of the Colt Huntsman

It’s really amazing when you look at how many firearms John Moses Browning has made or has been a large part of making.

But John Browning designed the Colt Huntsman and what would later be the Colt Woodsman as well.

Let me address the difference between the Colt Huntsman and the Colt Woodsman.

There are only three major differences between the Huntsman and the Woodsman.

The Colt Woodsman is more expensive than the Colt Huntsman because the Huntsman lacks features that the Woodsman has. What are those features?

The Colt Woodsman has adjustable sights whereas the Colt Huntsman has fixed sights. This is a big difference because this really limited the gun’s ability to adjust for any issues with the sights.

This makes a huge difference when shooting because typically if the slide isn’t locked to the rear and all you hear is that dreaded click when you pull the trigger it typically means malfunction.

With those differences being covered let us move on to the review of the Colt Huntsman. I may make a mention or nod to the Colt Woodsman model during this review as well.

The Colt Huntsman is an extremely ergonomic gun which is impressive given the fact it was developed in 1955.

This gun feels really good in your hand and most of the weight is located toward the rear of the gun so the gun really sits back nicely when you establish your master grip.

The grips on the gun are hard plastic panels with the Colt logo on the right side of the gun. But the grip angle is a solid angle and the gun actually feels great in hand.

The slide is extremely small on this gun. It’s the back half of the gun and has angled cuts that make gripping the blued slide a little easier.

This slide isn’t the easiest in the world to grab and rack due to its extremely small profile.

Once you have a grip on the slide it does slide extremely smoothly. It’s almost like the slide is floating once the initial unload is made from the chambered position.

The Colt Huntsman lacks a last-round bolt hold open so the slide lock plays a big part on this gun if you want to hold the bolt open for any reason.

The slide lock slides into a cut-out on the slide to hold the slide open. There is nothing internal that holds the slide back.

Attempting to pull the trigger will result in nothing. There’s clearly an internal mechanism that locks the trigger when the safety is on.

For a gun that was made in 1955, the trigger is surprisingly nice. I think a lot of gun manufacturers could really learn a thing or two from John Browning’s Colt Huntsman trigger design.

The sights are one of the major improvements made between the Huntsman and the Woodsman.

These sights are fixed and while I grew up shooting them and I’m familiar with them they would take some getting used to.

The Woodsman’s sights are much better than the Huntsman.

The magazine is a single stack .22LR spring-loaded magazine. It does have a pull-down on the left side of the magazine to make loading .22LR rounds much easier.

Very simple and time-tested magazine design. I’m down to one of these magazines over the years so it may be time to find a few somewhere.

Like I said I quite literally grew up on this gun. It is even the gun I wrote about in my 22LR vs .223 article.

This gun turned me from being scared to shoot guns to loving them in a matter of minutes.

The gun is smooth to shoot but it does have a bit more muzzle rise than most 22LR pistols, namely the Ruger SR22 and the Ruger Mark IV.

The gun is surprisingly loud but it’s still just a 22LR pistol. It’s not my go-to gun anymore because the above-mentioned 22 pistols shoot so much better and have newer features than the Huntsman.

But when I’m feeling nostalgic I’ll reach into the safe and take the Colt Huntsman for a quick range trip.

This classic is still fun to shoot and one I’m glad I have for life.

The Colt Huntsmans is a true classic and something that you can hold and compare side by side and see how far we have come in firearm technology.

I think it’s important to know where and how far we’ve come with firearm development.

This gun is truly fun, simple, and historic. If you’re looking for a piece of history to add to your gun safe, grab a Colt Huntsman or Colt Woodsman.

Be sure to take a look at our other gun reviews like the Kahr PM9 and the Kel Tec KSG or if you are in the market for a .22LR gun the Ruger SR22 and Mark IV.