Want to know the difference between 22LR vs 223? Let’s begin! Shooting is a huge part of my life. My father raised me around guns and taught me the basics when I was so young. I can’t even remember the first time I shot one.

However, I do remember being terrified of guns. I was afraid of the recoil. They were loud. If you tried to get me to shoot one I wasn’t familiar with, I would balk at the thought. Thus the .22LR was my saving grace. A small, fun, no-kick round that left me wanting to shoot more than I wanted to do anything else in the world.

The Colt Huntsman became my best friend as I shot it in the Western Maryland mountains, where my dad grew up. We would visit my grandfather and take a full load of hunting rifles and “my” coveted Colt Huntsman .22. I would shoot that gun for hours, hardly spend any money, and leave feeling like I was king of the shooting world. I would later learn to love guns like the Browning BL22 lever action .22 and nearly any gun I could get my hands on.

But alas, I wasn’t the king of the shooting world. I was a 10-year-old boy living the dream.

While I’m still no gunslinger or perfect shot by any means, I have grown more fond of all guns, including the ever-popular .223 (5.56 NATO) round and the AR or modern sporting rifle platform.

Shop in stock .223/5.56 ammo in bulk and small quantities at Lucky Gunner. 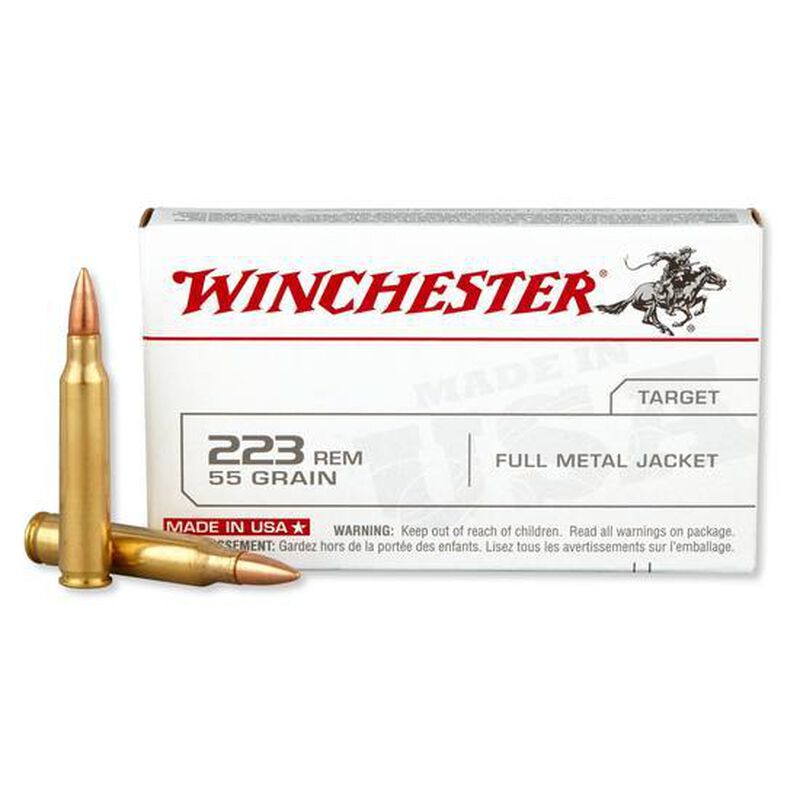 But you might wonder how one could compare a .22LR to a 5.56/.223? One is a “high powered” round, and the other is for squirrel hunting and plinking. But it’s not all that simple.

Well, this is relatively easy to explain. You can see they are clearly different for a layperson looking at a fully assembled .22LR round and a .223 or 5.56 round.

People often misuse the term caliber. Caliber is actually the groove diameter of the bore. Calibers are expressed in 1/100 of an inch, which is what determines the diameter of the projectile. 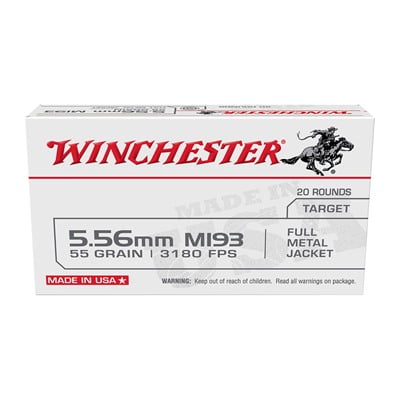 When they say .223 and .22LR are the same, the rounds have the same bullet diameter. While the casing for the rounds are not the same and the bullets may look wildly different, they measure the same diameter of .223″.

5.56mm is just the metric equivalent of .223″. Since the metric system is a far more popular unit of measurement globally, NATO (North Atlantic Treaty Organization) uses 5.56 instead of calling it .223 Remington.

Well, your buddy is right. BUT, and that’s a really big but, they are dimensionally identical except in minor areas. If I handed you one of each round, you probably couldn’t tell the difference.

The largest difference in the .223 and the 5.56 NATO round will be how hot the load is, or you know, it’s got more powder.

The biggest thing you need to be concerned about with this is the chamber pressures. With the introduction of .223 Wylde, the standard .223 barrel/chamber has become a thing of the past. The 5.56mm NATO round typically has a higher PSI chamber pressure and 5.56MM shouldn’t be shot through a .223 chambered rifle. But a .223 round can be fired just fine through a 5.56mm rifle.

The biggest takeaway is that the amount of powder is the biggest difference in the .223 vs. 5.56mm round.

That’s an interesting question and a somewhat valid one after someone tells you they shoot the same size round.

After all, the .22LR is cheaper, sometimes easier to find, has less recoil, is the most common round globally, and the guns are typically lightweight, and so is the ammo.

But, while the bullets are the same diameter, they are not the same grain.

WAIT A DANG MINUTE, WHAT DO YOU MEAN, GRAIN? YOU ALREADY SAID THEY WERE THE SAME SIZE.

I know, I know. We have to address yet another part of a bullet. The grain of a bullet literally refers to its weight.

Again, the grain refers to the weight of the bullet only. It does not include the case, powder, or primer. So we are just talking about the part that flys through the barrel and strikes the target.

Bullets come in various grain weights, which is what gives a bullet different flight trajectories, thermal ballistics, and velocity.

Choosing a grain can often depend on a number of factors including but not limited to:

After you ask yourself some of the above questions, researching what grain bullet to buy becomes a much easier task. If you only care about sending your rounds through paper targets for fun then cost is gonna be the most important factor.

So what grain bullets are available?

Commercially available, .22LR ammunition typically comes in grains between 20 and 60 grains, and velocities vary from 575 to 1,750 ft/s (feet per second).

We aren’t going to get into the feet per second, flight trajectory or thermal ballistics, or velocity because I’m not qualified enough to speak about it outside of laymen’s terms explanations.

Shop in stock .22LR ammo in bulk and small block at Lucky Gunner. 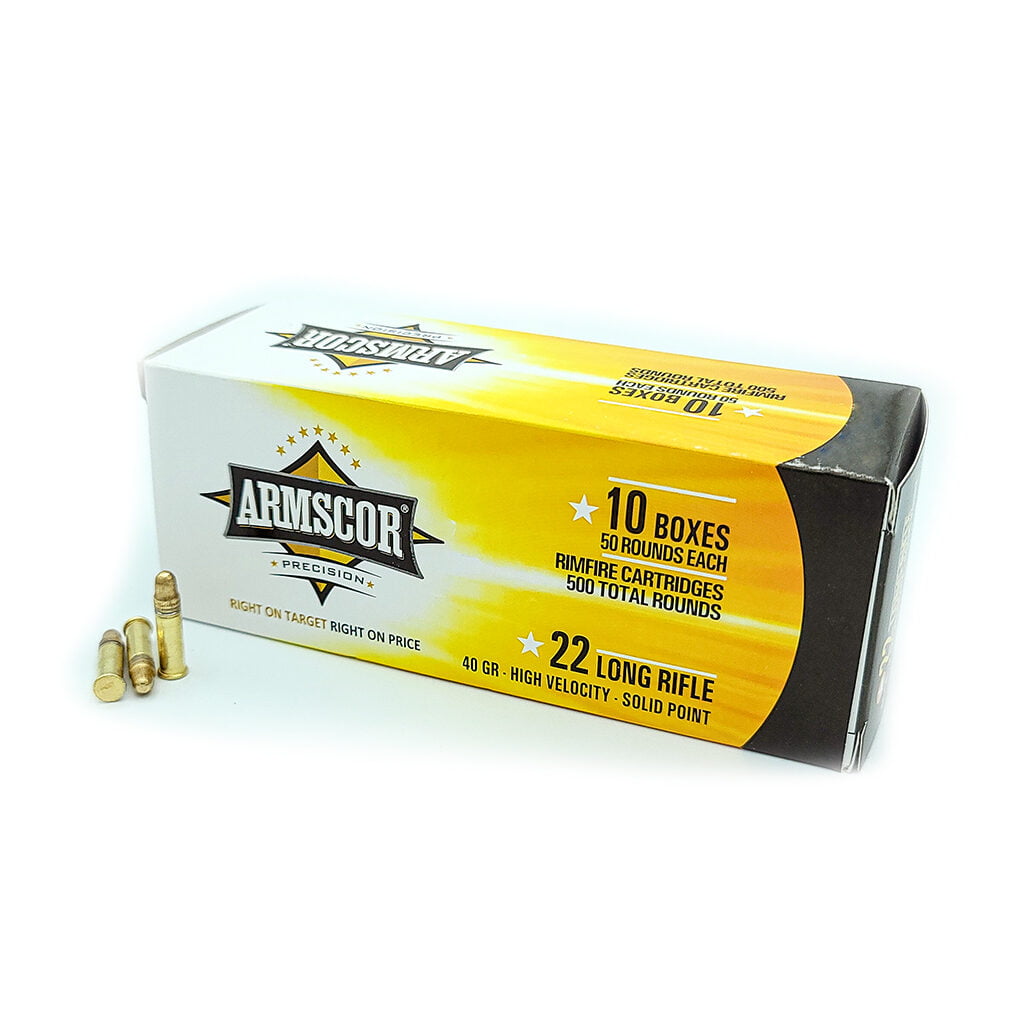 Most commercially available .223/5.56 NATO ammunition falls between 35 to 85 grains. The varying grains give the fired round different properties during flight and upon impact. The most popular grain weight for the .223 / 5.56mm round is 55gr or 55 Grain.

Again, we won’t get into the science because I’m not qualified to speak on ballistics in scientific terms.

During the pandemic of COVID-19, the availability of anything firearms became ridiculous. Ammo probably being the most difficult thing in the firearms world to find.

If you could find it the price was so high you would think it was snoop dog!

It wasn’t until recently that both 22LR and 223 ammo could be found in stock again. You can check sites such as Brownells, Palmetto State Armory, Lucky Gunner, and Guns.com for available ammo if you are shopping for some.

One of the major differences in 22LR vs 223 is the quantities that each ammo is sold in.

22LR is typically sold in 50, 250, and 500 round blocks. They are called blocks because the packaging is typically blocked-shaped and holds a large number of 22LR rounds.

You’ll see one of the main differences in the .22 round, and the 5.56 round is rimfire and centerfire.

Every round has a primer. When the primer is struck, it ignites a spark that ignites the powder that expands, causing the bullet to shoot.

The primer on a 5.56mm centerfire round is in the middle of the casing and is typically a circle. Whereas, on the .22 round, the primer is contained in the rim of the round and can be struck anywhere on the rim to spark the powder.

Centerfire rounds are known to be more reliable and consistent when firing than rimfire, which can sometimes not fire when struck.

Manufacturing processes are always improving. While I’ve had nothing but good experiences with all of the .22 LR rounds I’ve had lately, it still carries the stigma of being a less reliable round than the centerfire 5.56 round.

The .22LR round is great in range guns like the KelTec CP33 and the Ruger SR22 pistols. In contrast, you can use the 5.56 round in serious mission rifles such as the Noveske N4 PDW and other AR-15 patterned rifles.