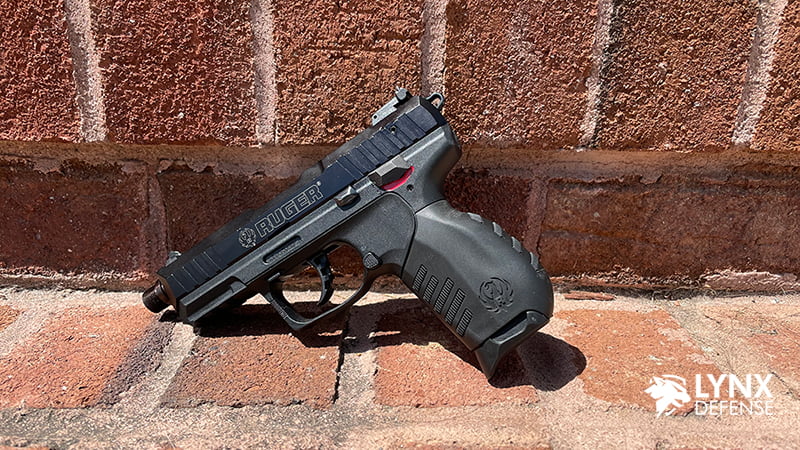 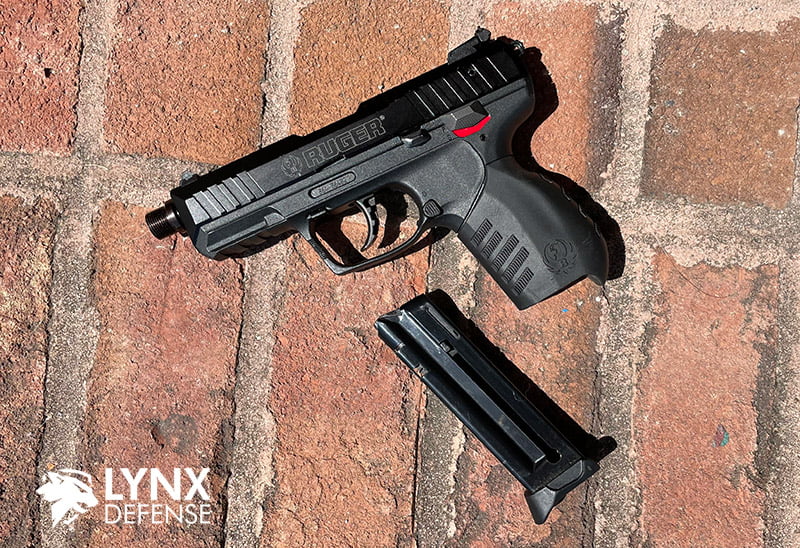 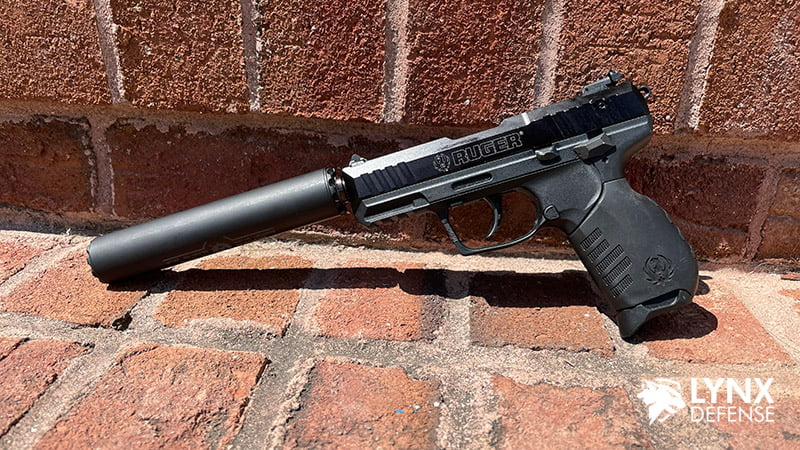 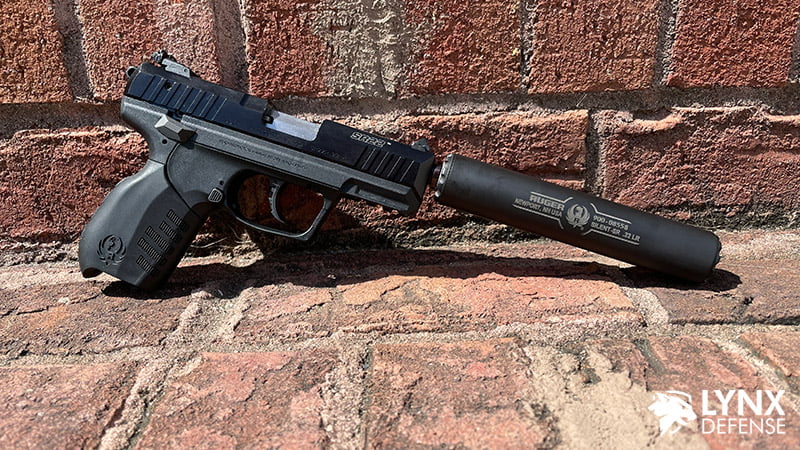 The Ruger SR22 is a 22 LR polymer-framed pistol from Ruger with its 10 + 1 capacity. This Ruger pistol is a very popular range gun and is great for target shooting. The Ruger SR22 comes in several configurations, including a stainless model, a threaded barrel model, and one with a 4.5″ barrel.

Ruger has also teamed up with distributors to create distributor exclusives from places like Lipsey’s, Chattanooga Sports, Bill Hicks, and TALO. With those distributors, the SR22 was made in lots of colors.

We’ll start this review off by saying the SR22 is not an everyday carry gun. It’s definitely a great target pistol. The model we used for this review is the model 3604, the Ruger SR22 threaded barrel version.

Let’s take a dive into the features of the Ruger SR22 and see what makes it one of the best 22 pistols on the market today.

The grip of the gun is all polymer. From the slide down, it’s nothing but polymer with the exception of the controls.

The frame of the gun fits nicely in your hand and there are no thumb groves like you would find on the Glocks.

The SR22 comes with two interchangeable rubber grips with angled serrations. The rubberized grips that are included are great to switch out for shooters with slim or wider palm configurations.

While the customizable grips are becoming an industry-standard it’s still nice to see it on lower price point guns and is worth noting this feature.

The cutout establishing the master grip on the firearm fits really well in your hand and allows you to establish a really good grip easily.

I have smaller hands, and this gun fits really well in my hands, even better than something like a Glock 19 or even the SIG P938. But again, those are 9mm guns with larger frames.

The rubberized grip texture gives a pretty good tacky feel to the gun. It’s a lot different than your all-polymer frame pistols in that those mainly use abrasion to grab your hand and keep it in place, whereas the rubber actually allows you to get some cushion and provides a little bit of give for you to grip the pistol.

The sights on the SR22 are your standard three-dot configuration with a fixed front sight.

The rear site allows you to adjust for both windage and elevation, and while I like the fact that it’s an adjustable rear sight, it appears there’s a spring inside the rear sight.

I’m not sure I like a spring in my rear sight because I’m not sure how long that’s going to last.

However, the sights themselves do look really good. They are white and extremely visible in daylight.

They are not tritium-filled so they will not be glow-in-the-dark, so from the factory, they are not night sights.

I’m not sure how practical night sights are on the Ruger SR22 anyway, as it is a 22 LR pistol.

The Ruger SR22 safety is an ambidextrous safety that also functions as a decocking lever.

When the hammer on the gun is cocked and you engage the safety, it will not remain cocked.

When the gun is in the fire position and it’s cocked and you place it into safety, it will decock the gun as well as place it in the safety

The magazine release is another ambidextrous portion of this gun.

It sits right where the trigger guard meets the frame. And it is about the size of my pinky fingernail.

It’s not very large but it is easy to press and magazine shoots right out.

Both sides of the magazine release function well, and they’re basically mirrored so they stick out the same length on each side.

The magazine release pops out almost as if it was spring-loaded. The could be an issue if it is but it may be the spring in the magazine pushing back against the top of the slide.

The slide stop-or slide release- sits just in front of the safety, just past the middle of the firearm.

It’s about where you’d expect it to be, if not directly in the center.

It’s a small metal slide stop. Slides into place pretty easily, and also pull down to release the slide very easily, as well.

There’s not a lot of resistance when releasing the slide. I don’t know if that’s every Ruger SR22, or if this one has been shot enough to where it’s well broken in and seems to work great.

Don’t have any issues with it. If the magazine’s in, it will push the slide stop up.

The magazine’s removed, you pull down on it and it sends it into battery. It also works well with the magazine in it, sending the slide into battery.

One of the few cons of the Ruger SR22 is its trigger.

It just lacks something…

It’s not the double-action side of it. That’s what you’d expect from a double-action trigger. A long, hard, relatively smooth pool with a crisp ending break and an absolute full reset. That I understand from a hammered fired pistol, especially one that’s double action.

The single-action is what really gets me. There is about an inch or so of take-up and once you hit the wall, it’s still an extremely hard brake. The reset is all the way back out, then, you’re back to that ridiculously hard wall.

The single-action is not absolutely atrocious, but it really lacks a clean, crisp, smooth, light break.

It works, but it’s not something that you’re going to love. It’s not awful, but it’s not what you remember your first prom queen being.

I’m not here to down the Ruger SR22 because it is a fun, nice little compact 22 pistol and I think it serves its purpose. But if we’re being totally honest about it, the trigger is probably one of the few cons of this gun and probably the largest con I’ve gotten to thus far.

This wouldn’t be a good review if we didn’t bring up our products. I’m just kidding.

Nonetheless, let’s talk about how the Ruger SR22 fits in our Range Bag. Our Pistol Range Bag is made for mostly any pistol you can fit in it. However, the SR22 is a smaller framed pistol and actually slides further into our standard gun inserts than most guns.

The SR22 magazine also is skinny, so when you place it into our magazine holder, it is somewhat loose, but it’s not too loose that it’ll fall out. So unless you turn it completely upside down and shake it like a crazy person, it’ll work just fine.

Since the Ruger shoots 22LR, those rounds come in 500 round blocks. So you will have plenty of room in our Pistol Range Bag or our Concord range bag to put your 22LR ammunition.

There’s plenty of storage in our Pistol Range Bags for SR22 accessories, including extra mags, lots of ammo, a suppressor (if you have the threaded model of the Ruger SR22), and any range gear that you may need, including ear protection, eye protection, and cleaning supplies and other gun kits such as the Fit It Sticks.

The SR22 doesn’t have a ton of extra accessories that you can buy for the gun. So adding Ruger SR22 upgrades may be few and far between but there are some options.

The gun allows you to change out the front sight, so you can buy something like the HIVIZ SR22. Outside of your normal holsters, there aren’t many accessories.

You can mount a light on the Ruger SR22 or a laser to the small rail in front of the trigger guard, a Picatinny-style rail. It’s very similar to what you would normally find on a modern pistol.

There are a couple of unique SR22 products on the market. One of them being a compensator, another being a bumper for your magazine. So if you have large hands, the bumper will extend the magazine down much like other handgun magazine extensions.

One last accessory option we’ll talk about is spring options. There is a Sentinel Stainless Steel Captured Spring Guide Rod that is available, as well as Green Springs which claims to reduce failure to feed issues and replace the mag springs.

Overall, I really like how the SR22 looks. It’s a modern design with a polymer frame with really good lines.

The front and rear serrations make this look really nice while adding functionality. The stainless steel barrel is a nice touch from the typical all-black finish, and the Ruger engraving on the SR22 pistol engraving is fantastic.

The Ruger engraving is on the left side of the pistol, smack dab in the middle between the front and the back serrations, which really make for an extremely pleasing look. The SR22 model moniker is actually etched into the chamfer on the right side above the front serration, which I really like the engravings on this firearm.

You’re going to be hard-pressed to find a better-looking 22 pistol. Ironically, the Ruger Mark V is the only one that even competes, in my opinion.

It’s just a very different-looking gun. If you’re looking for a modern-style pistol, the SR22 is where you’re going to want to go.

Shooting the SR22 is a blast. It’s like the pop-it snappers you throw against the ground. You can literally throw them all day long and they never get old.

The SR22 is nearly the same amount of fun. It’s something you can shoot for hours and never get tired of shooting the SR22.

I personally had a blast shooting 10+ mags through it with ease and loading the magazine is a breeze. I do wish there were magazines that could hold more rounds.

I slapped on my Silent-SR .22 silencer on the SR22 as it seemed like an obvious fit. Shooting it with standard 500 Round Remington .22LR makes it easily done without hearing protection.

If you like range guns and you like not spending hundreds of dollars for a few hours at your local range then this is the perfect 22LR companion.

This gun will provide you with literally hours of fun at a tenth the cost of shooting a 9mm or other larger caliber centerfire pistol. It even has a threaded barrel for you NFA lovers.

While it doesn’t replace your EDC pistol, that doesn’t mean it shouldn’t be added to your safe and make it in your range bag on occasion. If you have a family or are teaching someone new to firearms to shoot, you couldn’t ask for a much better gun than the SR22. 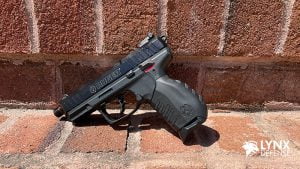 The Ruger SR22 is a compact .22LR pistol by Strum Ruger & Co. that has a flare for the fun side with threaded barrel and color options galore.