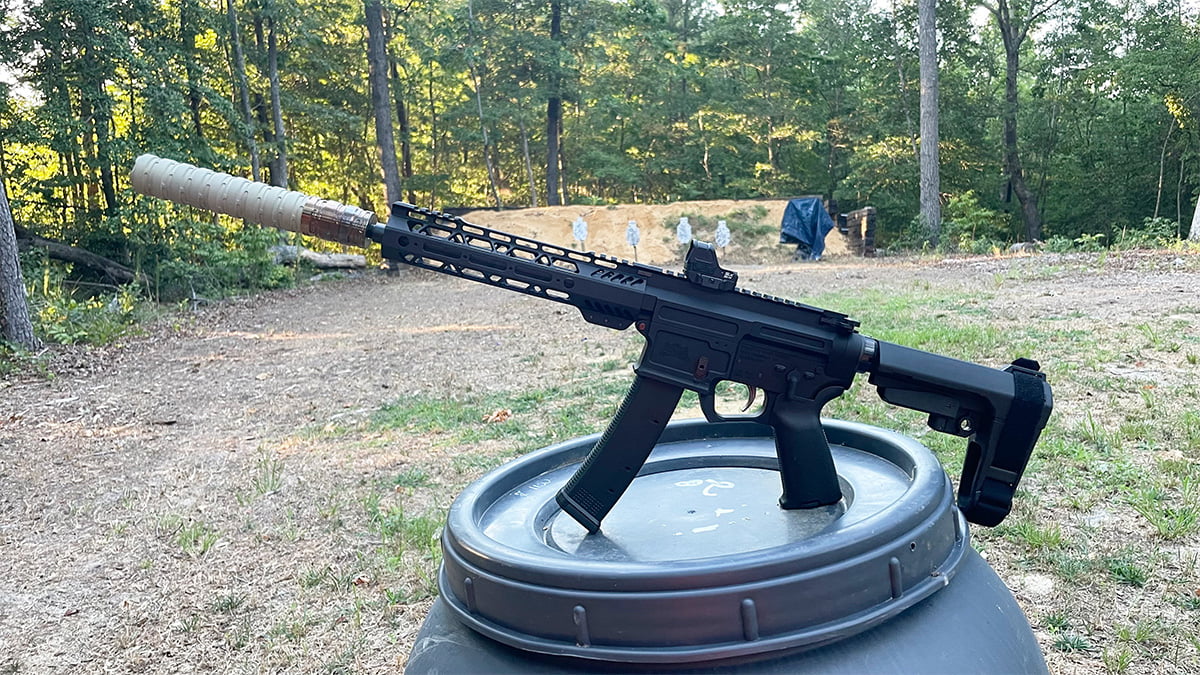 It’s been a few months since I’ve taken a look at a Palmetto State Armory gun so it’s time to give one another shakedown!

The PSA ARV is very similar to the PSA AR9 but has a few minor and/or major differences in the platforms.

Yes, ARV. That’s right a 9mm AR that is based on the Vityaz sub-gun. Similar to the PSA AK-V and the Kalashnikov USA KP-9, but with a little AR twist.

Pistol caliber carbines are an extremely popular thing at the mount, probably for a number of reasons.

First, ammo prices are at an all-time high and a 9mm round now costs was a 5.56 round costs 2 years ago.

So having a 9mm rifle that mimics your 5.56, 7.62, or .300 Blackout rifle is perfect for saving money and continuing to be able to hit the range.

The low recoil and overall fun of this gun is also a great reason for a PCC. As for, ballistics it doesn’t make much since at range but CQB or just fan at the range this is an absolute work horse.

At first glance, the PSA AR-V doesn’t really strike you as something that unique. After all the gun does look just like any other AR-15 platform gun on the market.

But once you start to look deeper you’ll notice some differences. I’ll start by diving into some of the standard features moving on to the more unique features.

The safety is somewhat underwhelming as it’s a standard mil-spec safety. But the good news is you can use any AR-15 safety you want on this gun.

The interchangeability is a nice touch but the standard safety is functional but nothing to write home about.

A very easy throw and what you’d expect from an AR-style of safety.

I personally love the Radian Weapons Talon selector switch, while it is expensive it adds so much to such a major feature of the gun.

The AR V comes in a number of different configurations but most of them come with some form of Magpul grip.

The nice part about the grip on the AR-V is like the safety, it too can be changed to nearly any aftermarket AR-15 pistol grip.

Personally, I won’t be changing the Magpul grip since it works great for me and it’s what I use on most of my guns.

The magazine release is where the PSA AR-V starts to set itself apart from the rest of the 9mm PCC’s on the market.

The magazine release sits at the very beginning of the magwell which is directly in front of the trigger well.

The magazine release is almost the exact same style/design as the CZ Scorpion. It’s extremely easy to use and drop the magazine out of the gun just by pushing it forward with your index finger.

For many, this feature might take some getting used to but for me, I was already familiar with the CZ Scorpion’s configuration, so I could pick it up pretty quickly.

The magazine well on this gun is bound to be a bit different than most of the 9mm pistol caliber carbines due to the CZ Scorpion style magazines.

I would recommend the PSA AK-V magazines that PSA makes. I’ve always had good luck with these mags.

The bolt release/bolt hold open on the PSA AR-V is in a wildly different spot than it would be on your standard AR configuration.

While this is an odd placement for it, it works and is okay. One of my few critiques of this gun is the placement of this feature.

I’m guessing the magazine is why the release had to be placed in this location to allow the last round bolt hold open to work as intended.

Again the good news is you can upgrade it to nearly any charging handle of your choice.

The bolt carrier group in this gun is different from a standard AR-15 bolt carrier but utilizes the same charging handle style.

You get many factory options from PSA, the most popular probably being the SB Tactical brace model you see pictured here.

A collapsible brace model also features a different handguard and looks very similar to an MP5.

If you want to file a tax stamp for an SBR, you can do that and add any stock you choose.

PSA Also makes several 16″ models for those in non-free states and is restricted to specific barrel lengths.

Shooting the PSA AR-V pistol is quite similar to many other PCC’s while they are only 9mm rifles because they are direct blowback, you do see a similar recoil profile to 5.56 most of the time.

That’s not to say the recoil is terrible or not easy to handle. It’s a compliment to the fact that this is the perfect training gun for your 5.56 rifles.

I enjoy shooting the ARV because it’s a small compact gun that allows you to practice shooting without breaking the bank.

Shooting suppressed is similar to shooing unsuppressed. Because it’s a direct blowback, you get a much dirtier gun with a suppressor but not nearly as bad as the AR platform.

Also, it’s worth noting that you get very little gas back in your face by shooting this gun suppressed.

Shooting suppressed means courses of fire that have back-to-back or rapid-fire will be much more tolerable.

I’ve had a ton of luck with the ARV shooting whatever I’ve thrown at it. Mostly 115 Grain 9mm but I have thrown some sub-sonic rounds that have worked just fine.

The PSA ARV In conclusion

Okay, let us wrap this review up! This gun is fun. It’s a blast. There are no if’s and’s or but’s about it.

It’s not a perfect gun. It won’t be your end-all-be-all, but it’s fantastic for the price point, and it’s a blast to take to the range and shoot.

This gun is a no-brainer if you already have a CZ Scprion and a ton of extra mags. You can use the same mags and gain a whole new platform.

You can easily find this gun on sale at PSA for under $900 with all the bells and whistles, then add your accessories, and you’re golden.

Buy a PSA AR-V
If you liked our review we would appreciate a share!