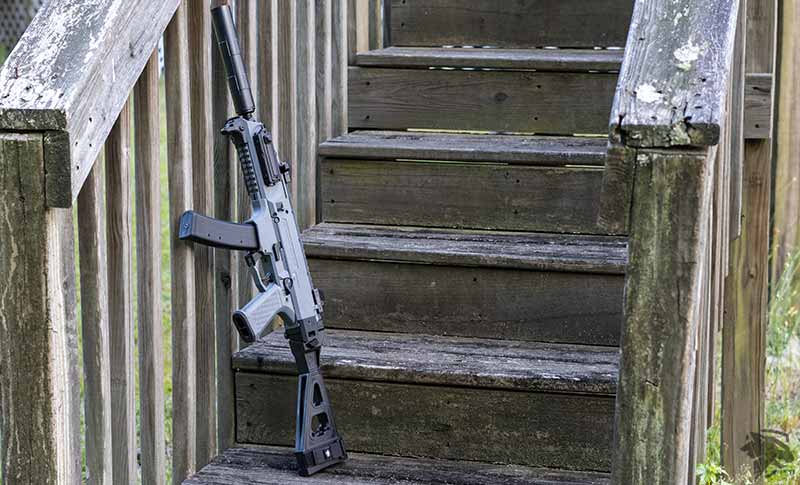 The CZ Scorpion EVO 3 S1 Pistol is a mostly polymer 9mm pistol caliber carbine made by CZ. We take a look at the ergonomics and function of this fun compact carbine.

CZ is a company that is clearly focused on innovating and making some fun firearms.

The CZ Scorpion EVO 3 S1 pistol, at first glance, is a fascinating gun that is almost entirely polymer.

It doesn’t appear to be very durable on the outside, but it does look very aesthetically pleasing. The EVO is a small, compact pistol caliber carbine chambered to 9mm.

The gun features a top Picatinny rail and three Picatinny rails on the front at the handguard’s three, six, and nine o’clock positions. It is relatively ambidextrous, at least with the safety. We’ll talk more about that later on.

The CZ Scorpion EVO 3 S1 pistol comes with metal iron sights attached to the top rail of the gun. This particular model has a folding SB Tactical brace.

The grip ergonomics of the CZ Scorpion EVO 3 S1 pistol are somewhat iffy, mostly revolving around the pistol grip.

Aside from the grip, the front of the gun, holding it in a C Clamp configuration, feels great.

To me, it does feel better to hold it at the magazine well, which is typically a pretty big no-no, especially when you’re shooting ARs.

Holding the Scorpion EVO 3 S1 in the C-Clamp style grip does seem to feel really good.

The EVO 3 S1 does come with a black hand stop. Mine is the gray model, but there’s an all-black model as well.

I actually use it as a hand stop in the forward position. So I don’t slide my hand too far toward the end of the gun.

I usually run this gun suppressed, so I don’t want to bump my suppressor accidentally. I usually slide my hand all the way to the front and use the hand stop basically as a stop in the forward position instead of in the pullback position.

The safety of the Scorpion is probably, other than the grip, the most contentious or disliked thing on the firearm.

The issue with the safety is, is when the gun is in the fire position.

On the right-hand side of the gun, typically for right-handed shooters, it’s going to poke into your trigger finger.

HB Industries makes a safety delete button, and the safety delete removes the lever on the right-hand side, effectively making this not an ambidextrous safety.

However, based on where the safety is placed, you really don’t mind losing the ambidextrous safety to have a more comfortable shooting experience.

HB Industries also makes an AK-style selector, as well as a few other options.

Personally, I picked up the CZ Scorpion grip by YetiWurks because I liked the design, and they also color-matched it to the same gray as this particular Scorpion EVO 3 S1.

Most people say the first thing they change out on their Scorpion is either the safety selector I mentioned above and the grip.

There are plenty of aftermarket grips, and on this particular CZ Scorpion EVO 3 S1, I’ve recently changed out the grip to the Yetiwurks.

You can see a picture of the stock grip below and the new grip.

You can clearly see the different angles that exist. That angle is just not conducive to a human hand and how they typically grip firearms.

Many people don’t like the stock magazine release because it’s built into the frame.

When you use this magazine release, it’s actually quite easy.

Just take your finger, push it forward, and it’ll drop the magazine free. It’s that simple.

The one thing that everybody complains about is that it’s not very protruded, and it can sometimes be hard to hit.

So a lot of people will purchase again from HB Industries, a paddle-style magazine release.

The magazine well has a flared or chamfered design, just like the CZ Scorpion Micro that we reviewed previously.

They have the same exact magazine well configuration.

I don’t have any heartburn with these magazine well designs.

The bolt release/bolt hold open is located on the left-hand side of the firearm.

It is a paddle-style design and slips down right smack dab in the middle of the gun.

It sits just in front of the safety and just to the upper left of the trigger. It also sits directly on top of the magazine release.

I find the bolt release/bolt hold open not very useful because it has an MP5 style charging handle.

I won’t use the bolt hold open to hold the bolt open very often, and I would slide the charging handle into the up position.

The charging handle on the CZ is actually quite nice.

It’s modeled after an MP5 style charging handle, and it’s located at the front of the gun, where you can reach up and grab it with your left index finger and pull backward.

It also has a locking position to hold the bolt all the way open.

So you grab the charging handle, rack it all the way to the rear, slide it upwards, and it will hold the bolt in an upward position.

Now, I have noticed that it doesn’t have a seated position like an MP5, and you can easily hit it accidentally, and it’ll slide forward.

It does work well and holds the bolt open, but know that you could potentially bump it, and it’ll slide the bolt forward and release the charging handle from the lock position.

The handle itself is a U-shaped plastic polymer.

Personally, I don’t have any issues with it, but there are metal replacements for it if you would like to change it out to a sturdier charging handle.

There are a handful of different aftermarket magazines, not just CZ magazines.

Magpul makes quite a few, and it is an excellent design as far as I’m concerned, and these are the same pattern magazine as the PSA AK-V.

The CZ Scorpion EVO 3 S1 pistol comes as just that: a pistol.

It’s configured by default with their CZ standard muzzle adapter, as well as an end cap for your rear brace attachment that covers the picatinny rail.

Like most guns, the CZ Scorpion contains a 1913 Picatinny rail on the top of the gun that will allow you to mount pretty much any Picatinny mounted optic.

Preferably on this gun would be something like a red dot sight.

The Scorpion is chambered in 9mm and a pistol caliber carbine, which would not make a good candidate for a low variable power optic.

Personally, I’m putting on the Holosun HS403B optic for this Scorpion.

Accessories on this gun are aplenty.

If you go to any aftermarket website for parts, you will likely find something for the CZ Scorpion.

The Scorpion allows you to mount on the Picatinny rails on the front handguard anything from light switch mounts, to hand stops, to foregrips, to you name it. You can mount it on the Scorpion 1913 Picatinny handguards.

I mounted the Cloud Defensive CLS and the Streamlight Protac Light.

Additionally, you can mount an optic or a flashlight on the top of the 1913 handguard, like the Cloud Defensive OWL light.

The light options on this gun are endless.

Personally, I decided to run the Streamlight Protac mounted to the three o’clock position.

The sling on this gun has some unique options that a lot of guns don’t come with.

There are two points of sling attachment on the left side of the gun. One is in the middle, to which you could attach a clip or a key ring. Then one on the very back of the gun before you get to the brace attachment area.

When looking for a solid way to carry the CZ Scorpion look no further than the Byte. If you want to carry it using a backpack you already have then our backpack insert, The Policy works great also.

The Scorpion has arguably the worst trigger I’ve ever felt in my life.

That is the one big major drawback of the Scorpion. Good thing there are aftermarket options for the trigger, but from the factory, it is not a good trigger in the slightest.

The trigger does have a take-up.

However, it is an extremely strong take-up with no real wall.

Squeezing trigger all the way to the rear, you are going to be surprised by it because again, there’s no wall, and there’s really not a definitive crisp break.

It’s very hard to tell where the break is.

The reset is very defined. It’s not terrible, but then there’s still take-up back to the wall if you even want to call it a wall at this point.

Ergonomics of the Gun Overall

The gun actually feels great in your hand.

It feels great holding it, and it feels just overall solid.

Now, granted, it is made of a polymer, but it does have a nice feel. It’s not heavy. It’s not excessively light.

It just kind of falls right in the middle of where you’d want this gun to fall weight-wise because you’re going to have to manage recoil on this super light gun, and of course, it is a 9mm pistol caliber carbine.

If you don’t change that out, it’s not quite as comfortable. It’s not unbearable, but it’s definitely something that takes some getting used to, and it’s not something you’re going to want to shoot regularly excessively.

The SB Tactical brace is extremely fluid with this gun and really completes the gun overall.

Shooting the gun is great. It does have some soft recoil, but it is very manageable.

If you want to mitigate the recoil, I typically shoot it suppressed, which adds a few extra ounces of weight to the front of the gun, and that does help with reducing muzzle rise.

With such a short barrel, you will get some muzzle rise, but with the suppressor, it does seem to keep it a much flatter shooting gun.

The gun is great. It can be a project gun if you aren’t happy with some of the features, but overall it’s a kick-ass gun.

Not to mention CZ just makes really awesome guns like the Shadow 2 and the CZ P07.

I have really grown to like the pistol caliber carbines, like the PSA AKV and even the SIG Sauer Copperhead. This gun really fits into a particular place in the firearms market.

This gun can be a self-defense weapon, but it is really geared towards shooting and having fun at the range.

It definitely would be a great option as a truck gun, but it would not be my go-to home defense gun.

It’s slightly more than just a range toy, but I wouldn’t say it’s a workhorse. If they came out with a metal body CZ Scorpion EVO 3, then I think we might have a contender for a very serious workhorse weapon that could be home defense, and even have military applications.