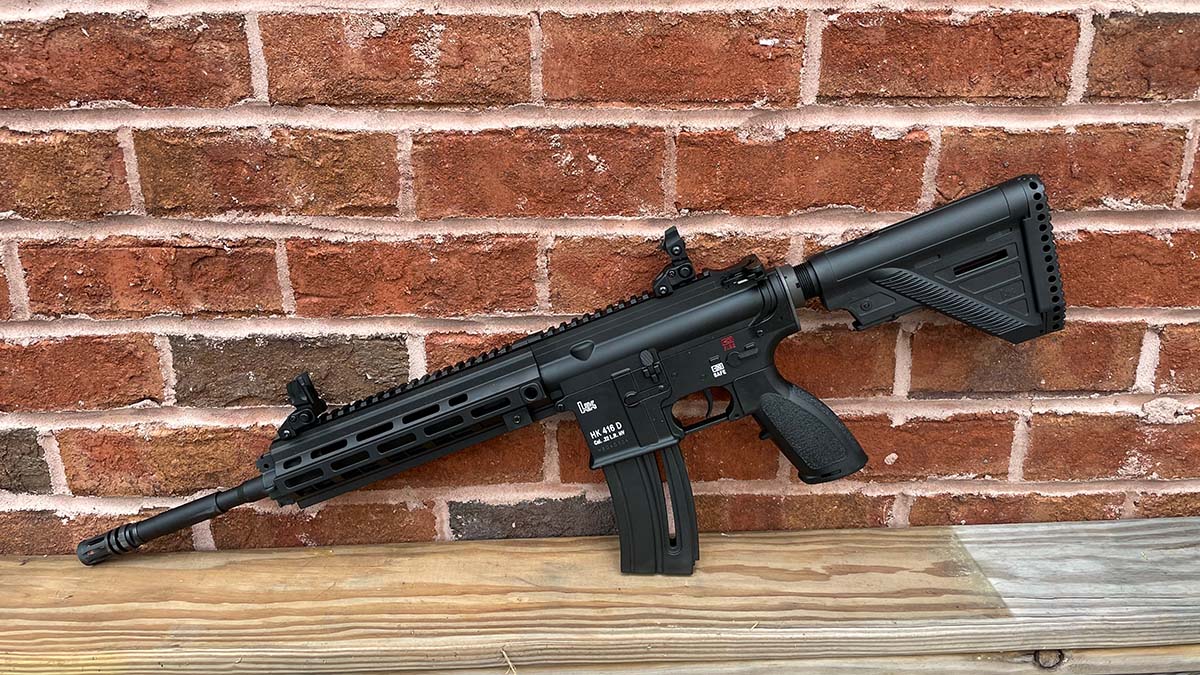 The HK416 is an iconic gun in its own right. It’s featured in more movies than you can count and has been used on real-world battlefields around the world. This HK416 cambered in 22LR may just tickle your fancy for less than you ever thought possible.

I’m taking you on an in-depth journey through the HK416 22LR Review.

The HK416 22LR is actually not manufactured by Heckler and Hoch. This rifle is actually farmed out to a company called Umarex.

Umarex is a German company also but they focus on making BB guns, airsoft guns, and pellet rifles.

Umarex makes replicas of most of H&K’s lineup of guns for the airsoft community. So it makes sense that they created and adapted their airsoft platform for the HK416 22.

One of the nice things about the HK416 is that it shoots 22LR and you might wonder what makes that a feature.

If you don’t know the difference between .223 and 22LR we did a complete write-up on it.

The HK416 22LR is a mixed aluminum and polymer construction. It weighs in at 5.7 pounds. Which feels very close to the 7.85 pounds HK416 A5 that it’s built to replicate.

The lower receiver is mostly aluminum and has a decent feel to it.

It’s worth mentioning that while the lower is aluminum it doesn’t have the same polished feel you get from a standard lower.

This is likely due to the coating on the material they used rather than the aluminum itself.

The lettering on the receiver is filled in with white and red fill.

The upper receiver is mostly polymer which might strike you as odd because that’s where all the explosions happen.

The polymer upper doesn’t bother me and seems to not reduce the quality feel of the gun.

The handguard on this gun is probably where most of the weight of the gun comes from.

In true to clone form it is nearly the exact handguard that is on the HK416A5. It’s solid and feels exactly the same.

Grips can be the make or break for any rifle and for the obvious reasons of that’s what you grab and interact with the most.

HK416 22LR’s grip is the exactly copy of the A5 look and feel is nearly identical.

The grip on the gun has a rounded back strap which has a really nice ergonomic feel.

In my opinion, ergonomic grips are something HK does extremely well.

One thing I don’t like about this grip at all is the “front hump”. The front hump is something that most standard A2 AR pistol grips have and the main reason I deposit those standard grips in the trash can.

It’s meant to split your middle and ring finger while holding the grip but for the life of me I can’t figure out why that’s necessary because it’s not about comfort.

The grips texture has a different feel than a standard A2 style grip. It’s not a checkerboard design but rather a sponge-like texture.

It’s not overly abrasive but it does a decent enough job, especially given the low recoil this gun will have shooting .22 rounds.

The controls are one of the most important part of any firearm. Not only are they what you use to make the gun function but they enhance or hurt the ergonomics of the gun.

One of the biggest complaints about guns that are modified to shoot smaller calibers like .22LR is they lose features and controls that are on the larger version of the gun.

Unfortunately, the HK416 22 does lose some of the controls its big brother has. But let’s dive into them individually.

On any AR15 pattern rifle, the safety is a must-have. So it’s no surprise that the HK416 D has one.

However, that doesn’t mean it’s the equivalent of the safety on the HK416 A5.

This safety selector is clearly polymer. It has substantial drag when moving it with your thumb but not a ton of resistance.

When you hit the safety or fire position you do get an audible click.

But there is a noticeable difference between this safety and a mil-spec metal safety.

The safety is not ambidextrous which is a con and also a difference from the HK416A5, as it does feature an ambidextrous safety selector.

As of this writing, I’m not sure if the safety is interchangeable with any mil-spec safety. But after opening up the frame I highly doubt it is.

It’s hard to screw up a magazine release button, or so you would think anyway.

Like much of the upper it is polymer instead of the normal aluminum.

Once you press the magazine release the loaded or unloaded magazine immediately disengages the lower receiver and drops free.

If the gun is the slightest bit horizontal it will drop the magazine with no fuss and in a hurry! I know metal AR15 magazines that don’t even drop as well as this 22LR magazine does.

The magazine is 100% polymer. It feels solid in your hand but has a lot more moving parts than your average HK416A5 magazine.

The magazine has a pulldown slider in the windowed area of the magazine and that allows you to pull down the follower and makes it much easier to load the .22 rounds into the magazine.

The magazine does feature last round hold open. If you insert the magazine empty and rack the slide it will also hold the bolt to the rear.

So this is a rather disappointing section of the HK416 22 review.

The bolt catch on this gun is simply cosmetic. That’s extremely disappointing because there is no way to lock the bolt back or release the bolt without the magazine.

This basic functionality is available on nearly every gun and any caliber. So to me, the fact this gun doesn’t have a functional bolt catch or release is a huge swing and a miss on HK and Umarex’s part.

This alone is going to cost this review a full point during the evaluation.

I for one use the bolt hold open as an additional safety mechanism when transporting my rifles or leaving the range.

If the bolt is open and locked to the rear I know the chamber is clear.

The trigger is relatively smooth however it does have a heavy pull.

Shooting rapidly is easy no recoil and the trigger is actually decently smooth for a 22LR AR-15 platform.

As always we have to give a shameless plug for our range bags. This gun pairs exceptionally well with our Bronx Discreet Rifle Case.

You can also throw it in our tactical rifle case if that’s more your speed.

I look forward to the day our tactical rifle case is photographed with an HK415 22 on one side and the HK416A5 on the other!

The accessories for this gun are someone slim since the internals are proprietary. So some of the components can’t be swapped out for your favorite AR15 accessories.

The trigger is another one of those features that sadly isn’t interchangeable with other AR15 triggers on the market. So there’s not going to be any switching this trigger out for your favorite Gisselle trigger.

The trigger isn’t a huge deal to me but if you’re a trigger person and this is a big deal for you I might go a different direction with it.

Included with the HK416 22LR are a set of polymer flip-up sights.

The sights are something that obviously was an afterthought.

These sights feel… cheap at best. But that’s somewhat to be expected at the price point of this gun.

They are definitely lower quality than something like the Magpul MBUS sights.

I will ding the gun for this but I won’t harp on it because I will likely throw a red dot sight on this gun and call it a day.

Since these iron sights aren’t an exact copy of the HK416 A5 I wouldn’t get much heartburn from changing them to something like the MBUS Pro’s, Troy Battle Sights, or the Troy Micro Flip Ups.

If you want something more true to the original look grab the Midwest Industries combat rifle sight set.

Will they be accurate?

But they are probably as accurate enough for polymer irons and a plinking rifle.

I plan to throw on one of the best red dot sights and just ignore the polymer irons. Like I said earlier I may grab the Troy Micro Flip Ups for this gun.

So I went to put on one of my Silencer Co Warlock 22 silencers.

What happened when I took off the muzzle break was a disappointment.

Probably should have expected it but it wasn’t a standard 1/2 x 28 thread that normally comes with 22 rifles.

I went ahead and ordered it and now I wait. I’ll report back once it arrived and I can mount my suppressor.

Overall, the aesthetics of this gun were excellently done. From afar it can be hard to tell if this is a true HK416A5 or the 22 version.

I really like how closely this gun comes to the HK416 and I love a good quality plinking rifle.

Shooting the HK416 22LR is a dream. This gun is incredibility flat shooting and relatively quiet. This gun would be awesome with a lightweight trigger but even without a new trigger, it’s crazy fun.

With nearly no recoil whatsoever you can transition between targets and really just have a blast.

This gun is perfect for the whole family and I’d highly recommend it for first-time shooters.

Man, you wanna talk about a load of fun! Throw on a suppressor and this gun really shines.

My wife and I had a free hour to burn so we ran out to the backyard range and put around 200 rounds down range.

This gun is not gassy at all, if you’ve ever shot 5.56 or 300 Blackout you know those tend to be very gassy rounds when shooting suppressed.

That’s not the case with this HK416 22LR, it’s quiet and so smooth it’s just nothing but absolute fun.

I will take this time to comment on the silencer adapter. The 1/2-28 Barrel Thread Adapter for HK 416 .22LR made by Tacticool22 works great but I want to point out it may be long for some 22LR suppressors.

The Silencer Co Warlock did not thread all the way on the adapter for me. But the Ruger SR-Silent did thread on fine and performed great.

I really like the fact this gun is iconic in its overall look. But a few of the major drawbacks for me come down to functional controls and accessories.

But it would be nice to have a few more interchangeable parts with regular AR15 parts.

My biggest beef with this gun is the bolt catch/release. But even had I known that prior to purchase it likely wouldn’t stop me from buying this gun again.

So if you want a fun iconic range gun that feels almost exactly like your AR, grab the HK416 22LR. 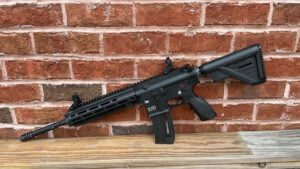 The HK416 22LR is an extremely similar replica to the real HK416 chamber is 5.56 NATO. This is the closest you’ll get to the real thing.