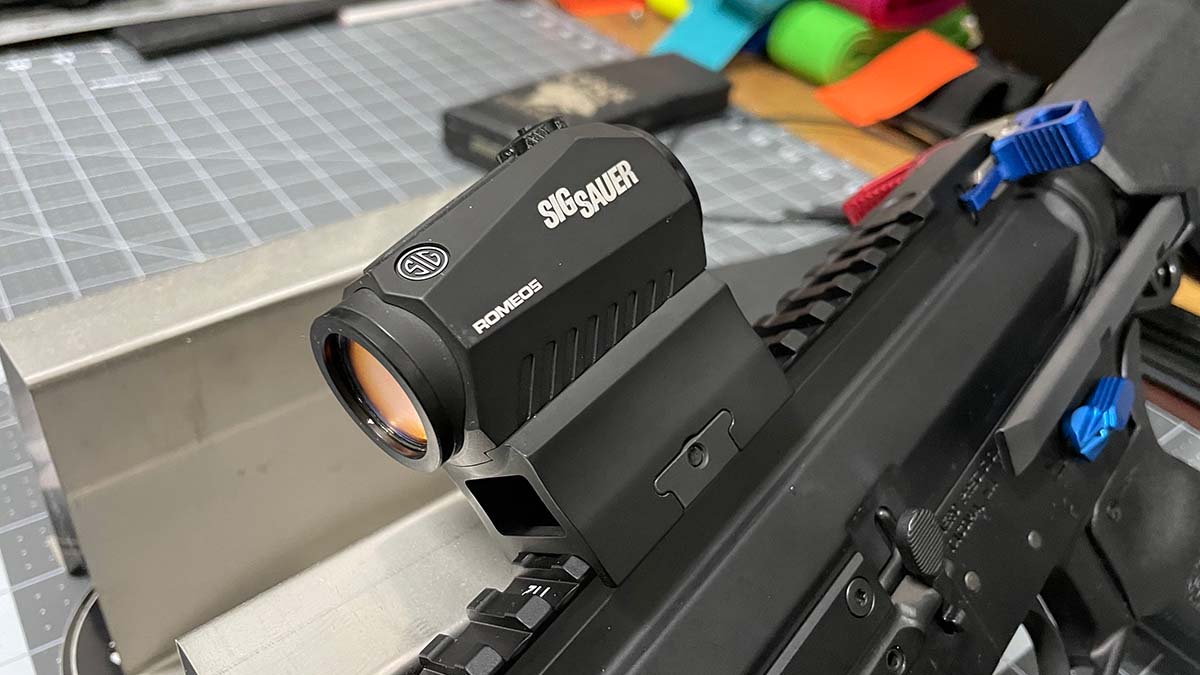 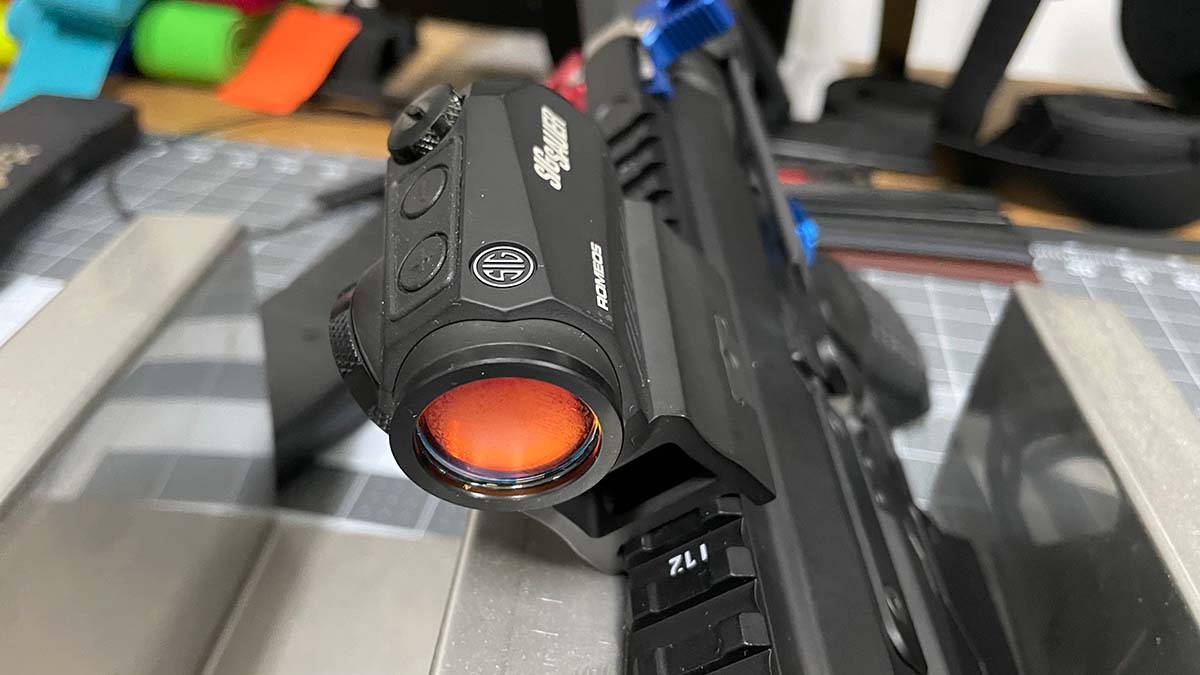 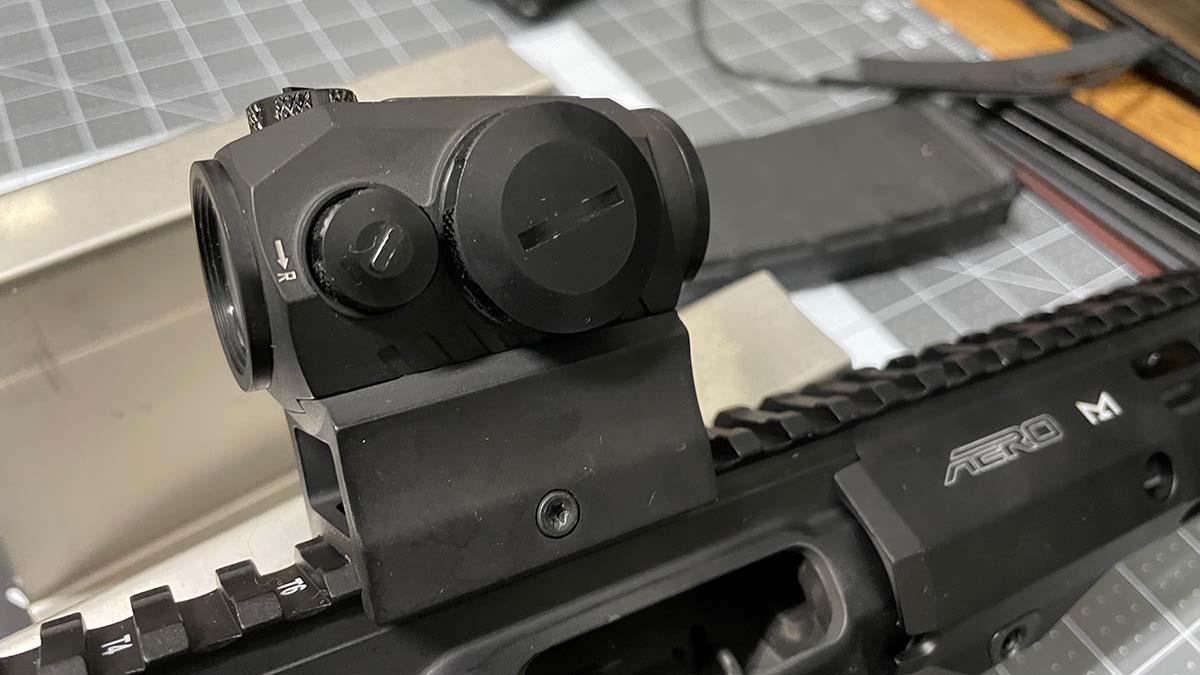 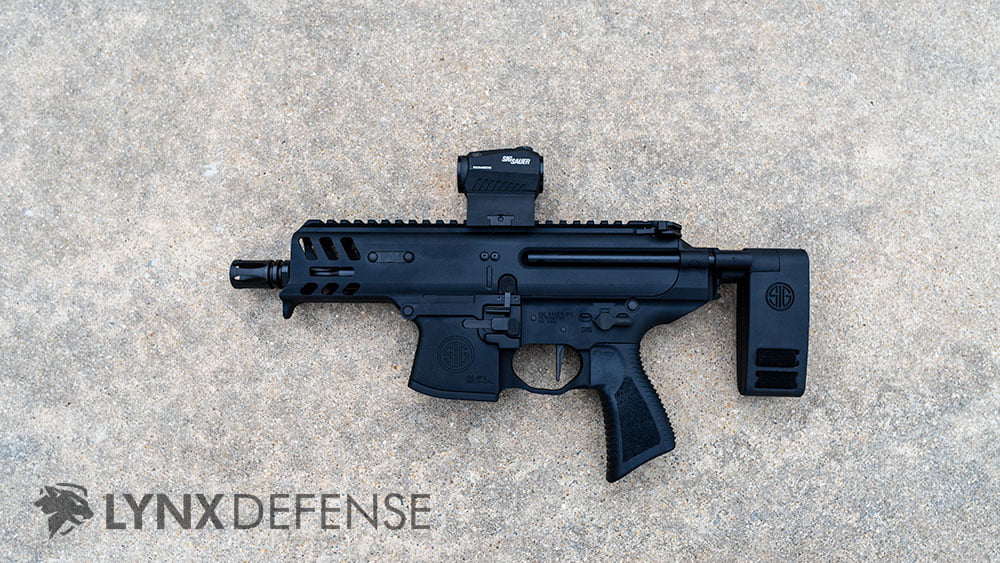 The Sig Sauer Romeo 5 red dot sight is not the latest and greatest red dot on the market. It’s actually several years old already. So why is the Romeo 5 still on our list to review?

After taking the Sig Romeo 5 out of the box, you’ll notice it has decent weight, and the overall feel is pretty good for a sub $200 red dot sight.

The Sig Sauer Romeo 5 is that it is actually a pretty decent little optic.

When you take it out of the box, it has the feel of essentially an Aimpoint T2, comes with a mount.

The included mount is kind of bulky.

You could definitely go for an optic mount a little smaller, with a little less weight.

Overall, the optic itself isn’t extremely heavy, and the controls are self-explanatory. There’s a plus and minus membrane push button on the top of the optic.

Two dot adjustment turrets are very low profile. Even the battery compartment is on the right-hand side of the optic and is also low profile.

The Sig logo is on the top left-hand side of the optic. The front glass has an orange-ish glow, and the rear is clear.

Overall, the Romeo 5 looks good. I can’t complain too much about the optic aesthetically, a very nice optic so far.

The materials on the Sig Romeo 5 appear to be an all-aluminum construction.

The turret caps themselves are also metal construction. It’s definitely a different type of material.

The front and back glass is clear and seems sturdy.

The included mount appears to be the same material as the optic itself.

Overall, the weight is negligible compared to some other options on the market, and for its price point, it’s right on par.

Coming in right at 5.1 ounces this is in the same ballpark as other red dots in its price range, such as the Monstrum Vader Red Dot Sight. But is slightly heavier than the more plastic-based Bushnell TRS 25.

The reticle on the SIG Romeo 5 is the most impressive part of the optic to me.

It is two MOA, and it is adjusted on one MOA increment. So I really like the dot.

Any gun that I’ve thrown this optic on, namely the Sig Copperhead and the Aero Precision EPC, it’s been able to hit at least on a body-size silhouette steel target without any adjustment out of the box.

Don’t get me wrong, you definitely want to adjust it, but the settings out of the box are pretty close, so you don’t have to make many adjustments and waste of ton of ammo sighting the Romeo 5 red dot in.

The reticle itself has eight positions, two of which are night vision.

You get to those positions by the membrane pad on the top. The maxed-out setting leaves somewhat of a halo, but not as bad as some other optics I’ve seen, namely the Holosuns.

If you have it on in low light and have the dot on maximum setting, you’ll get a halo effect inside the optic.

Now that doesn’t happen on any other setting except the maximum brightness setting.

So if you have it at a middle-of-the-road setting, or even just under the maximum setting for this, there is no halo effect, and you’ll have a crisp dot.

Now, if you’re outdoors in maximum sunlight, you won’t see a halo effect at all. So that’s a nonissue if you are shooting mostly outside.

Adjusting the red dot sight is as simple and easy as it gets. You can remove the adjustment turret covers with your hand or a coin or small tool.

The let right adjustment is on the right side of the optic if you’re looking at it from the rear.

The elevation adjustment is directly on top of the Romeo 5.

That’s pretty standard in the small red dot game. It’s enclosed on the right-hand side with a cap.

The one thing I really have to brag about on the Sig Romeo 5 is how small and compact they made, not only the battery compartment but the turrets for adjustment.

It’s a really compact optic. It’s tight and no obtrusive when you look through the sight.

I really like how the turrets and the battery component aren’t distracting. It’s actually a really, really nice setup.

You either use a screwdriver, a dime, a quarter, nickel, or anything you can get, and you can take the battery cap off.

It’s secured with a rubber gasket for waterproofing the optic and only takes one to power it.

Easy to put in, take out, and you can actually unscrew it by hand because it has some nice cuts in the actual cap itself. So if you need to, you can use your thumb and your finger and twist it off.

Once again we haven’t truly tested how durable the Sig Romeo is but from just initial observations it’s as durable as any other option in its class.

In my experience, I haven’t had a single reliability issue and I haven’t exactly been gentle with the Romeo 5.

I think the overall durability is sufficient for most people look at purchasing this optic.

The sight picture on this is red dot sight good.

In this price point optic, probably the best sight picture money can buy at this point.

The turrets and the battery compartment are such a low profile and almost built into the ceiling and the wall of the optic.

You almost don’t even notice them. So you can really focus downrange, focus on your target and get your dot on target so you can get a good shot.

The mount that the Romeo 5 comes with is sufficient, but it’s not an exceptional mount.

But I would definitely want something with a few more features like a quick disconnect.

However, for an included mount this one really isn’t bad.

I’m not a huge fan of the single Torx screw used for tightening the mount to the rail.

Should you buy the Sig Romeo 5?

If your optic budget is $300+ then I’d say go for something like the EOTech HWS optics.

But if it’s sub $300 this optic not only is on the lower end of your budget, so you save a few bucks, but it is a performer.

You can also find them at a number of retailers including Amazon, Palmetto State Armory, and Primary Arms.

I’d highly recommend buying the Romeo 5 it has the features you want and fits your budget range. Sig Sauer makes a wide range of products including the Sig P938 and the Sig P320 X5 Legion, which we have reviewed as well!

Sig Sauer makes some great red dot sights and if you are in the market be sure to also check out the Sig MSR and Juliet 3 Micro Magnifier combo.