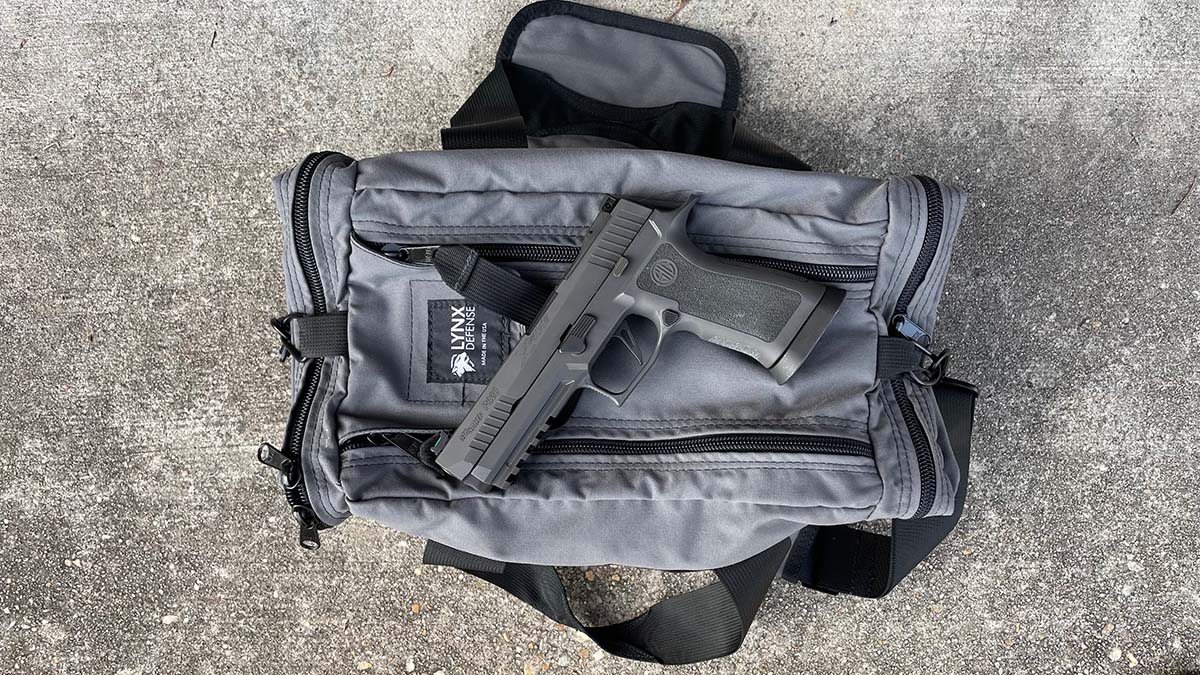 I feel like I need to preface this review by saying, I am a Glock fanboy, if you haven’t read my other handgun reviews, I make no qualms about it. I like Glock’s. My personal everyday carry gun is a Glock 19. So for me to branch out into the Sig P320 X5 Legion world is interesting to say the least.

But I recognize that the P320 has its place. I got my hands on the P320 X5 Legion because I felt like it was unique, it’s not a concealed carry gun because I feel like they’re kind of overdone and it was time to branch out and do something a little different.

What makes the P320 unique on the exterior is the fact that the grip is tungsten infused with polymer. So it has a very distinct and very unique feel. As soon as you grab it, you’re going to know that this is a different gun than what you’re used to in the P320 lineup. It has a really solid feel to it when you first grab it. But let me not get too far into this.

Let’s talk about the features of the X5 Legion. Overall, the guns weight clocks in at 43.5 ounces. Which is kind of crazy for what you’re getting, because this is a full-size pistol.

Let’s talk about the grip ergonomics.

The grip on the gun is tungsten infused with polymer. It’s really interesting strategy for Sig to try.

Now I would never want to change this frame because this thing is fantastic. When you pick it up, it balances in your hand really well.

This frame is heavy compared to something like the regular P320 but not that much heavier, however, there’s definitely some substance there that’s much different.

Overall weight, it’s definitely heavier, but when we get into the shooting, I’m going to explain why that’s okay. Especially on a full size carry gun like this.

The bottom of the grip frame has a 1913 Picatinny rail. You can mount a flashlight, laser, or anything that mounts of a Picatinny pistol rail.

The trigger frame is extremely elongated, especially on a pistol. I really like this because if you’re using gloves, you can get in there really easily.

Now it does have that standard P320 blocky style frame, but it works really well on this gun.

It does have a Beaver Tail, it allows you to establish your master grip really well. The big selling point that SIG tries to make on this is the balance.

It’s worth saying that is not just a sales tactic. It does balance really well in your hand. It’s almost like if you were to hold this under the trigger guard it would float.

So it holds really, really well. Overall. I really like the grip. The grip is a nice texturized grip different from the P320.

It is slightly different then what you’d see on a standard P320, it doesn’t have a thumb finger groove on the side of the frame.

The SIG logo actually is at the top of the frame, not in the middle like it is on the P320 and it’s not quite as aggressive and that’s probably due to the tungsten, but it really doesn’t matter because it feels really great.

One con on the grips are if you don’t like them their is no interchanging the grips.

The texture on the grip doesn’t feel quite as abrasive as a normal P320.

Now let’s talk about the sights. The sights on the P320 X5 Legion are a bit different.

First of all, it comes ready to mount an optic. I believe the optic mounting on this is a bit different. I believe the only optic you can mount on here is the Romeo One Pro.

The stock sights on the X-Five Legion are actually really, really nice. You have a fiber optic front sight, which again, I hate fiber optic sights on pistols like I said in a number of other reviews, including the Staccato P.

I just don’t like them, but maybe my mind’s changing because I like it on this gun.

It could have a lot to do with the rear site is blank. It just has your standard U cut, there’re no dots, there’s nothing.

It’s just the fiber optic front sight and that really works for me especially with this gun.

Overall, I just, I really like the sights and the way they did it on this gun. On the rear sights you can adjust the elevation and windage.

Let’s move on to the controls.

So first and foremost, let’s talk about this gun and its controls.

The gun doesn’t have a physical safety. The safety like all guns, should be in your trigger control.

Now, of course, this contains a drop safety and there were some issues with the P320s and dropping them on the hammer.

Those have since been remedied, and I don’t foresee any issues with those. On to the magazine release.

The magazine release on this is literally a direct copy of the regular P320s. A sideways triangle button for the release and this one doesn’t have any etchings around it.

It sticks out pretty far which makes it extremely easy to use. When you depress the magazine release, it shoots the magazine out. Even unloaded ones. Works pretty flawlessly.

Next we’ll talk about the slide stop. The slide stop on this is actually really nice much like the P320s series in general.

It’s ambidextrous, so it’s on both sides. I really like how Sig did the slide stop on this gun.

The Glock Gen 5’s use the same type of dual-sided slide release and it works really well.

I’m a big fan of what them doing that because you can reach up and grab it on both sides. I know that’s recommended, but I like the ability to do that because if you’re having a hard time getting it down, you can force it down with both fingers.

Moving on to the trigger.

Now the trigger on the Sig P320 X5 Legion carry is probably one of my favorite things on this gun.

It’s a flat, almost forward-adjusted trigger. It has very little take-up. The wall is very clean. The reset is exactly at the wall. There’s no rear take-up. It’s a very smooth trigger.

Of course, this wouldn’t be a Lynx Defense review without mentioning our pistol range bags.

If you are going to carry a large pistol like the Sig P320 X5 Legion or your Double Stack 1911s or Staccato’s or any of the guns you prefer to carry that are full-size frame, large competition style handguns, highly recommend you go with our Concord.

It is a hundred percent larger bag and it’ll hold more guns and have a feeling if you own a SIG P320 X5 Legion, you own other guns.

The accessories for the X-Five Legion aren’t as vast as a lot of the P320 series but there are still some notable ones, starting with the red dot.

This is not a cheap pistol red dot by and stretch but it does have a decent number of solid reviews.

Once you tack on the Romeo 1 Pro red dot to this gun it becomes a pretty price gun at nearly $1,400.

The good news about the Romeo 1 Pro is you can buy it at popular online retails like Amazon and Optics Planet.

Flashlights are almost a must-have accessory these days. Since nearly half of any given day is dark you want to make sure you aren’t literally shooting in the dark with your carry gun.

While the X5 Legion isn’t exactly your EDC carry you may still want to have something that can cut through the darkness and the golden standard of pistol-mounted lights in the Surefire X300 Ultra.

The aesthetics of this gun are fantastic. It is nearly the same color as a regular P320 and I believe the slide has the same coating, but the frame is a little different color.

It’s got a grayish hue and that would probably be from the tungsten that’s infused with the polymer. Now that being said it looks great.

It largely doesn’t matter to me. These are all tools at the end of the day, but you still want your stuff to look nice.

That could be some pros and cons there, but overall, I don’t have any issues with that.

The aesthetics really set in on the top of the slide. It has three cut holes, so you can see the barrel.

I really think this was more or less to cut down on some of the weight on the front end and actually create true balance on this gun, but they do provide a nice aesthetic to it.

The rear of the top of the slide has your optics plate cover that holds the rear sight. On a standard P320, it’s just a flat slide and then of course on the optics-ready models, it’ll look very similar to this.

This is a very long gun and has a very large frame, but it is a very attractive gun. I really like the way this looks, especially the colors.

The frame almost matches the slide better than it does on the standard P320s.

Shooting this gun is really where it shines and that’s probably where a gun should shine.

SIG’s claim on this gun is one of the best shooting pistols on the market and that’s a marketing blurb.

How this gun shoots is extremely subjective.

Say what you want. In my opinion, as a Glock fanboy, this gun is probably one of the best shooting pistols on the market.

That says a lot because I am not a Sig Sauer fanboy by any means. I own one Sig, but it’s not in the P320 series.

I wouldn’t want to carry this every single day because this is a massive gun, but as far as shooting goes, if we’re just going to the range, give me the Sig P320 X5 Legion.

Shooting the X-Five Legion is an absolute blast and there’s probably not much you can feed this gun that it won’t shoot.

While I doubt you are shooting this gun as an everyday carry here are some good ammo options.

You know, it’s great to be able to shoot guns and run a company that really revolves around the firearms industry because I get to interact with and shoot a lot of guns.

I’m not going to sit here and say, I’m a firearms expert and I think a lot of gun ergonomics and controls and sights are all subjective to the end user.

I will always recommend that you get something in your hand before you make a decision.

If you can shoot it, shoot it, find out if it’s going to work best for you.

But I can tell you that all the guns I’ve shot, the SIG P320 X5 Legion is by far one of my favorites.

Again, I’m unashamed Glock fanboy, but I will probably own another one of these.

This gun is fantastic. I’m more of a rifle guy, but I can tell you when it’s a nice pistol. You can pick it up, it’s very fluid and controls are great. The recall mitigation is easy as can be.

There’s very little muzzle rise overall, this is just a joy to shoot.

My recommendation, if you want it is the SIG P320 X5 Legion is worth every penny.