What are you looking for?

by Michael in At The Range

I’m in no way an expert range builder, so take any advice and try any techniques at your own risk!

Determine the size range you can safely create with the space that you have. I took some initial measurements, and I’m going to shoot for a 50 yard by 30/40 feet range.

The land that I’m working with has quite a few trees and some underbrush. The brush isn’t very thick, but the trees range in size from a few feet in diameter to a few inches. Trees and any natural obstacles that may interfere with your shooting lane should be cleared.

I’ve had a chainsaw for a few years, but it wasn’t one I’d run for several hours, let alone run hard. So I picked up a brand new Stihl Professional series MS261 C-M.

After picking up the chainsaw, I decided to walk the area again to mark it off. I used a few fiberglass posts I had laying around to mark the area I wanted to clear.

I recruited a friend of mine for some free labor. We walked over the area again and came up with a plan. We started with the smaller trees to thin out the area to see what we were working with.

For safety and to make the job a bit easier, we decided to lay the decent size trees where the berm would eventually be. The trees tops and leafy limbs were dragged behind the berm area so they wouldn’t be in the way of our working area.

Update: Wanted to create a running cost total through every stage of the range build. Some of the items will be optional but I’m keeping track of each as to note my expenses through the process.

Watch the video we put together for day one of the Building a Shooting Range Series:

We are building a new home shooting range, and we’re taking you along for the ride by documenting the process. Welcome to our second update, or as we like to call it, “Where We Are In The Process as of The End of June.” If you’re new around here, we are working on building a backyard shooting range. We also started a running tally of the cost of the range so you’ll know what to expect if you are interested in building your own. 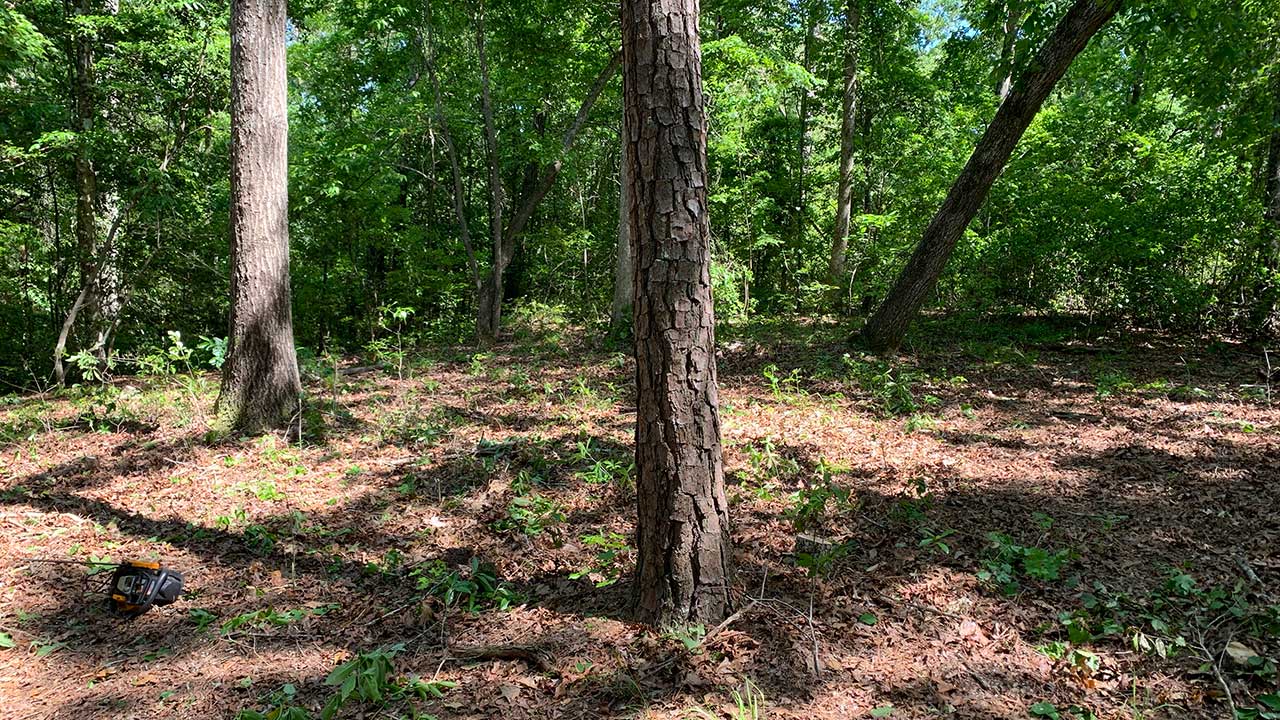 I’ve never had more respect for arborists in my entire life. I’ve got trees EVERYWHERE. But that’s a good thing. I wanted a natural barrier to cut down on the sound for my neighbors and keep the range relatively private, so carving out a spot for it in the woods is ideal.

I, once again, enlisted friends help felling, bucking, and limbing the trees on the range. One of the larger trees we felled was about a three-foot-wide, 100-foot tall pine that came down like a champ. Even Harry’s Holsters laughed at my excitement of how well the felling of such a large tree went.

I still have quite a few trees left that need to come down to clear the full shooting lane. But I’ve stopped any more tree felling until step 5 is complete.

Fortunately for me, building a shooting range is a legitimate business write off, but just because it’s a business expense doesn’t mean the money doesn’t have to come from somewhere. It’s nice that I’ll save a little on taxes, but it’s still an out-of-pocket expense.

With that being said, I had to make some decisions about spending money which would save time, energy, and be more efficient than my initial DIY approach.

As you can see above, I have a lot of underbrush, including a number of trees about the diameter of a softball or smaller.

Taking these out by hand is easy but requires time and effort including figuring out what to do with them after they’re down. So I decided I needed to have someone come in and take care of the underbrush so I could focus on the big trees on the property.

I reached out to Monster Mulching to come out and handle the underbrush and small trees. The next update will feature this phase because it’s awesome to see the before and after photos and videos of these forestry mulchers.

But back to Part 2, deciding to underbrush this way wasn’t cheap, so a lot of thorough groundwork needed to be done before he arrived to mulch the shooting range. 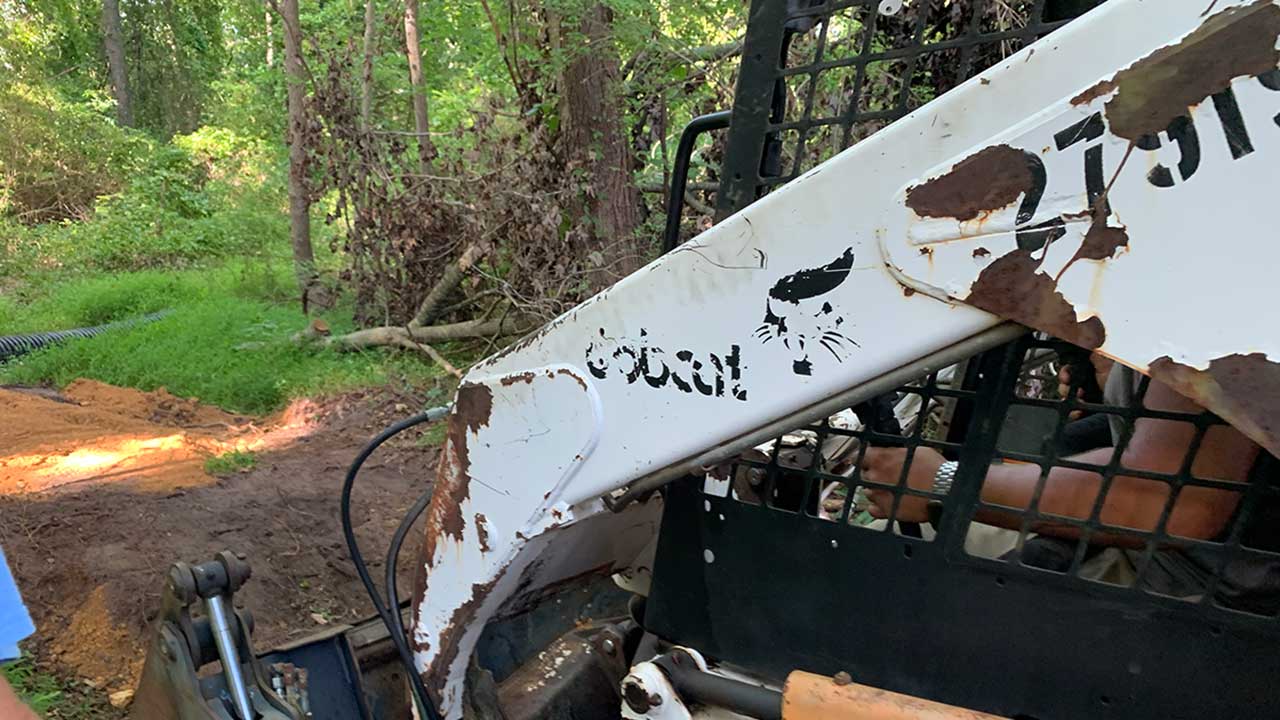 The range area is not actually situated on any wetland. It’s situated on the highest pitch of the area but slopes on the backside, making it perfect for the back of the berm. The bullet will always be traveling down toward the ground.

However, the entrance to the range is where a drainage ditch should be, so any runoff or excess water can run toward the nearest creek.

The issue with where the water is draining currently is that if it rains a few days before Monster Mulching comes to mulch the range, he won’t be able to get his several thousand pounds high-pressure hydraulic skid steer through the wet mud.

Once again I had to spend some money. This time on a 15-inch by 20-foot culvert pine, which I would cover with dirt to make a land bridge to access the higher range. But it wasn’t just the culvert pipe that cost some coin.

I don’t have an abundance of dirt laying around, much less an efficient way to move it (i.e., a skid steer with a bucket or tractor with a bucket).

So I got a tandem load of dirt delivered and harrassed my brother until he let me borrow his skid steer. I tried moving some of the dirt by hand… friendly advice – don’t bother.

We felled around 15-20 trees of varying sizes since starting the range project in May. There’s a functional space of around 25 yards that could be used; however, there is not a berm I feel is functional enough to stop rounds at this point.

The berm will probably be the last portion of this project. Getting to the berm and working around it will be much easier once the underbrush and trees are not in the way.

The far side of the range has not been touched yet to allow Monster Mulching to handle the bulk of the work since it’s largely small trees and underbrush.

The cost has increased slightly the table below shows the added cost so far in Part 2 and the running total.

Welcome to the last update on building our backyard shooting range! By far the biggest leap toward a completed range, and you’ll see why shortly. If the parts were named, you could call this the “mulching” part.

The video at the bottom of this post is the longest thus far in the series and probably the most interesting to date. I’ll try to continue to make them more interesting. If you haven’t done so already, check out part 1 and part 2 of the series.

Forestry mulching is one of the coolest processes to watch. That being said, reading about it is rather boring. So let us get right to the pictures of before + afters—big shout out to Monster Mulching for really speeding up creating our range.

Next will be to remove the remaining trees inside of the shooting lane. The plan is to do a time-lapse video felling the remaining trees in the lane and removing them from the lane. Once that is complete, I will rebuild the road that leads to the range to get fill dirt to the berm. Some big decisions about the berm will need to be made once the road is complete. The new estimate for completion will probably be early September, just in time for fewer bugs (hopefully).

Building a range is a multiple-step and multi-day/month process. But one of the most important parts of any shooting range is the berm, or aka the thing that stops the bullets when you miss.

If you never miss a shot, this part isn’t for you, John Wick.

Stopping bullets is obviously the key component to any shooting range berm. So I had to first decide how I wanted to create the berm for the Lynx Defense shooting range.

The trees I cleared in the first update left me with a ton of lumber that could be used as barrier walls for a dirt berm.

The original plan was to stake rebar in the ground and stack the tree trunks and limbs in between the sets of rebar creating footers. Then I would stack the cut trees between the rebar sets. The more I thought about this method, the more I realized how difficult it would be to execute given the varying size of the lumbar available. Not to mention the possible gaps in the trees and the fact the berm would eventually biodegrade.

The most popular of all berm walls/backstops are railroad ties. I started to price them out and look at the logistics of installing a berm this way. It wasn’t cheap. With in-stock railroad ties being nearly $15 a piece I knew this was going to be a sizeable investment.

I wanted to create a wide enough berm to move around while running drills, so the final width came out to be 35 feet. I also wanted to include sidewalls to help stack the dirt without it spilling out on one side or the other.

Another key feature of the berm is its height, which is arguably the most important safety feature. Currently, the berm will be about 7 feet high. I plan to add some height to it later, but for now, it’ll stand at a taller-than-the-average-man 7 feet tall.

The NRA and other range experts recommend a minimum of 12 feet for berm height, but in this case, I did not have easy access to the required equipment to make the berm quite that tall. Since it’s on private land that I own, it’ll do for now.

I want to reiterate this is a personal/business range only and will not be open to the public. Anyone with access to the range and with permission to shoot there will likely be very familiar with firearms and firearms safety. And I’ll know them personally.

Here’s a quick time-lapse putting up the back wall of the berm. We reinforced it on the backside with some large tree sections, but I will be going back and bracing it correctly before the dirt is brought in.

IF YOU ENJOYED THIS ARTICLE PLEASE SHARE WITH YOUR FRIENDS: